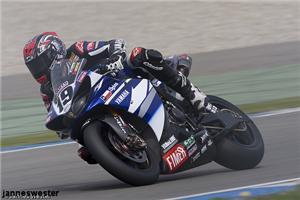 Josh Hayes kept his perfect streak alive at New Jersey Motorsports Park as he got the win in the AMA Pro National Guard Championship SuperBike race over the weekend.

Hayes held off Tommy Hayden to extend his lead in the points standings to 22. Hayden currently sits in second place, but with two races left in the season, it's anyone's championship. Hayes remains undefeated at the track, with four wins in four races.

Jordan was just one of a packed crowd at New Jersey Motorsports Park. Motorcycle events, which were recently added to the track, have become especially popular. Officials didn't release exact attendance figures, but told the Vineyard Daily Journal that the numbers were close to last year's AMA event, which saw the biggest turnout in the park's history.

The successful event means that AMA will likely be returning to New Jersey and the Northeast in the future.

"We know this is a very strong area. The riders enjoyed it as much as the fans did," AMA spokesman John Szymanski said, adding the riders repeatedly noted how knowledgeable the fans were at the race. "Combined with a unique facility, it's a great situation."