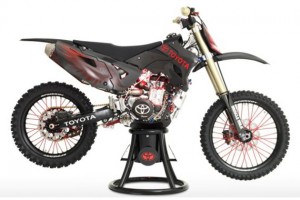 The Joe Gibbs Racing Motocross/Toyota (JGRMX/Toyota) Concept Bike is a special one-of-a-kind project built specifically for the 2009 SEMA show. The JGRMX/Toyota motocross partnership, in conjunction with the Joe Gibbs Racing Toyota NASCAR group teamed up to make the special bike a reality. The group logged more than 100 man hours on the project, and received modifications and accessories provided by 17 contributors to create a truly unique machine. The JGRMX/Toyota Concept Bike illustrates how far customizing can be taken, when combining a creative style concept with the latest in MX hardware, and some dedicated and talented technicians.

The project started out using a 2009 Yamaha YZ450F as the base platform to work from. The group utilized a specially lightened and polished frame, and installed carbon fiber body panels, and a custom fuel tank. Titanium and other exotic metals were used, where appropriate, to further reduce weight and provide an exotic appearance.

The YZ450F engine was treated to a reversed location valve train from Xceldyne. Reversing the intake and exhaust valves on the cylinder optimized the bikes balance point. Further induction modifications included a fan-driven forced air intake system with fuel injection. A Carillo rod coupled with a piston and rings were installed to complement the top end work. Conventional radiators were dismissed in favor of a custom aluminum extrusion cooling system. The use of a special air driven starting system with an air tank integrated into the frame was another departure from tradition.

The group fabricated a specially made swing arm with the Toyota logo machined into it. The rear shock included a custom reservoir mount location to move it further away from the heat coming off of the exhaust system. Clutch and front brake actuation were accomplished using levers by ARC Levers, and Motion Pro cables. Hammerhead Designs provided the shift lever and rear brake lever. The brake rotors were custom pieces with the Toyota logo engraved into them. Wheels from Spinergy Wheels utilizing Fiber Spoke Technology completed the chassis modifications. Sprockets, bars, and grips from Renthal finished the operational modifications.

An on board data acquisition system from Pi Research was the final touch to the project. This system was set up to provide real time information on functions such as suspension travel, engine temperature, and vehicle speed.