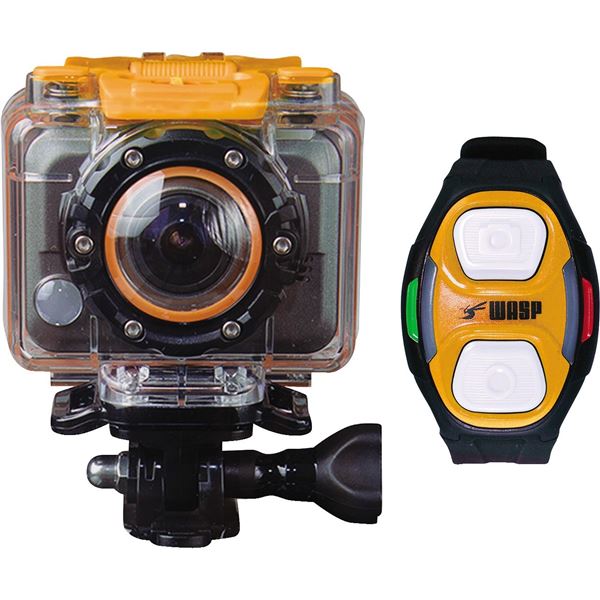 ✔
We'll email you when this item's available!

Prove to your friends and family how far you'll go to capture the coolest shot with a WASPcam 9900 Action Sports Camera! Inside this tiny action-sports camera hides the latest technologies, allowing users to efficiently film, edit and share their biggest moments or most interesting perspectives. Delivering High-Definition (HD) quality video in choice of 1080p30, 960p30 or 720p60 with all three modes available in 'Ultra Wide' and 'Wide' Field of View (FOV).

Mixing still-images into your production is quick and easy and brings a unique element to your final cut. With a WASPcam, you can snap a single image, experiment with time-lapses (1, 3, 5, 10, 30, and 60 seconds) or catch the entire action with a quick-snapping photo burst (10 photos per second). Get more for less with WASPcam!

Instantly turn your smartphone into a WASPcam Wireless Remote and video viewing screen by downloading WASPcam's exclusive WASPcam application. With WASPcam's App installed on your Android or iOS device, you can record video and photos from your phone, view exactly what you're shooting with WASPcam and then quickly share your footage with fans on your favourite social media page.

Make it even easier to capture great quality HD video footage using a WASPcam Wireless Wrist Remote. Expand the recording control of your WASPcam up to 15 feet (5 metres) away! A great asset to keep users from worrying about hitting buttons on a camera.

Related Categories
Camera SystemsCamerasDirt Bike AccessoriesElectronicsHarley AccessoriesSportbike Accessories
Reviews
Q&A
Answers provided by other customers are solely the views and opinions of those customers. Consult a professional technician or your vehicle's owner's manual for verification. Q&A is governed by our website Terms of Use.