- It was a monumental night in Las Vegas for the Red Bull KTM Factory Racing Team as Cooper Webb secured his first-career 450SX Championship at the season finale, giving the brand its fourth premier class title aboard the 450 SX-F FACTORY EDITION. His teammate, Marvin Musquin, finished second on the night and third in the overall championship after a hard-fought performance in the 2019 AMA Supercross Championship. 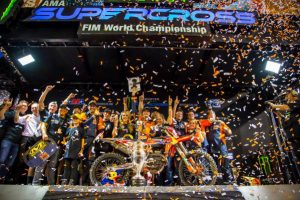 Webb, a two-time Western Regional 250SX Champion, joined the Red Bull KTM Factory Racing Team at the end of 2018 and the North Carolina native immediately went to work to pair himself with an all-new motorcycle and team. With 5-10 finishes in the first two rounds, Webb quickly found his stride with the team as he earned his first-career 450SX victory by Round 3. He repeated the win once again at Round 4, before going on to secure a total of seven Main Event victories as he carried big momentum into the final round in Las Vegas.

Coming in with a 23-point margin over Eli Tomac, Webb played it safe at the final round. Qualifying fifth, the newly-crowned 450SX Champion secured the holeshot in his heat and assumed the lead early on. With two laps to go, Webb felt some pressure from Tomac and he quickly settled into the second-place position, shifting his focus toward the Main Event. With a solid gate choice for the main, Webb powered his KTM 450 SX-F FACTORY EDITION into third off the start. From there, he maintained a consistent pace throughout the Main Event to secure a third-place podium finish en route to securing the prestigious 2019 AMA 450SX Championship. 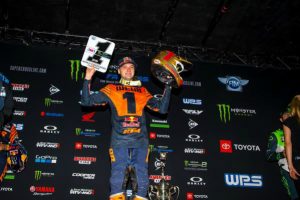 Cooper Webb: "It's been an incredible journey. This KTM team believed in me, they took me in and transformed me back to where I always knew I could be. This year was not expected at all and I can't thank them enough for giving me this opportunity to get back into this level and to do it this way is unreal. It's a dream come true, I've had it since I was a little kid. It's an incredible feeling."

Red Bull KTM Team Manager, Ian Harrison: "It's a little surreal right now to win this championship with Cooper. I've been through it before many times with Roger [De Coster] but to be in this position - it hasn't quite sunk in. Going from finishing ninth in the championship last season, we weren't expecting too much from Cooper in the beginning - we were hoping for one win. Once he got the one, then he did it again and his confidence went up from there and he really managed his races well. I think he was outstanding but last round in New York when he wasn't feeling well and he came through in the clutch time with a win, that's the test of a true champion and he did it." 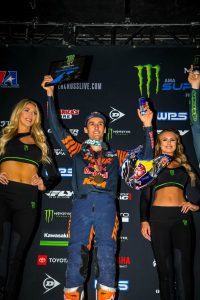 Musquin, the second-place qualifier, lined up in 450SX Heat 1, where he put himself into a top-three position off the start. He quickly worked his way into second early on and made a big charge in the final laps to go after the heat race win but he ultimately secured a second-place transfer into the Main Event. He got off to a second-place start in the Main Event and he maintained a consistently fast pace to ultimately finish second on the night. After putting up an audacious fight this season, Musquin ultimately finished third overall in the 450SX Championship with two victories under his belt.

Marvin Musquin: "I was looking for one more step than last year but overall it was a decent year. I gave my best this season and that's all I could do. A little bit of mistakes and the end of the year took me out of the fight but I'm looking forward to next year and getting ready for outdoors."

Harrison: "Marvin was super impressive this season. He started the year off with a knee injury and not riding very much and I was amazed at how well he kept his fitness up and how well he adapted to the surroundings and the championship chase and he got himself in there quickly. For a while there, he was in the hunt for the title, too. At the end, he had a few things that didn't go his way and he lost a little steam but I think it was an outstanding season for him and I'm super proud of him."

The Red Bull KTM Factory Racing Team will enjoy one weekend off from racing before jumping into the opening round of the 2019 AMA Pro Motocross Championship in Sacramento, Calif. on Saturday, May 18.