(Press release) CIRCUIT OF THE AMERICAS, AUSTIN - The American MotoGP race weekend at the iconic Circuit of the Americas is a celebration of American racing, and no rider symbolizes success like three-time consecutive 500cc Grand Prix World Champion Kenny Roberts Sr.. 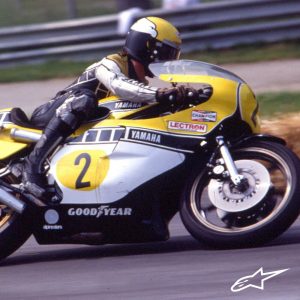 King Kenny's distinct riding style, honed on the dirt, redefined premier class motorcycle racing, with his kneedown style soon being adopted by the rest of the field. 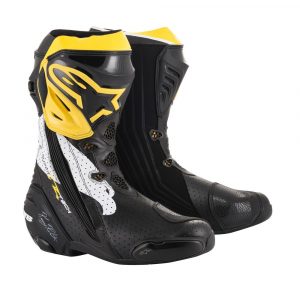 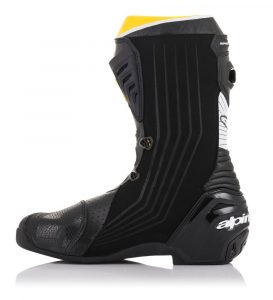 Alpinestars' most iconic road riding boot worn by a roster of the fastest world champions past and present, the Supertech R features performance innovations, including a redesigned compound rubber sole, an ergonomically profiled shin plate and a redesigned front flex area - all of which enhance the podium winning performance of this CE-certified boot.

Technical microfiber upper construction offering superb levels of flexibility, while the lightweight rubber compound sole offers excellent grip and feel and allows for natural flex as the rider changes position and pressure on the foot-peg.

Newly designed external TPU shin protection is ergonomically shaped and wraps around to outer calf and is engineered to spread and dissipate impact energy across the entire surface while remaining compact, while the replaceable polymer heel plate slider protects from impact and reduces friction in the event of a crash.

Separate internal bio-mechanical ankle brace works with the outer structure of the boot to form a protective system allowing full and free movement of the foot, ankle and leg. New research has produced re-profiled double-hinged inner and outer torsion bars to give greater impact protection to the ankle by progressively absorbing flex and rotation stress, reducing pressure and hyper-extension injury to the lower leg joints.

First conceived at the end of the 1990s, the first generation Supertech boot was launched into the market in 2002 and immediately redefined the standards by which road racing footwear was measured - so revolutionary was its concept and construction.

Having been through multiple updates following constant development of every part of the boot, the Supertech R today represents the pinnacle of racing innovation for track and road use. Every component is meticulously engineered for high performance protection, precision and flexibility; technology used by Alpinestars athletes in MotoGP and WSBK, MotoAmerica, BSB and all other championships where Alpinestars riders are competing is available throughout its global dealership network ensuring that Alpinestars passes all the benefits of this development and track testing research directly to customers who enjoy the boots for their everyday riding on the road and track.