Amongst the 17 races in the Supercross schedule, the Daytona race is unique for several reasons. First of all it's the only race that isn't a Feld Motorsports (the promotor of Supercross) event. It's also the only race in the entire series that isn't held inside a professional baseball or football stadium-instead they load the infield of the historic Daytona International Speedway with dirt to build the track. Ask any professional racer and they will most likely tell you that the toughest and most grueling race of the season is always the Daytona event. 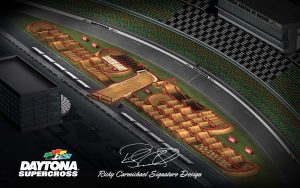 Daytona is also the halfway point in the race schedule, which works out perfectly for reveling bikers enjoying their spring break, aka Daytona Bike Week, to kick off their riding vacation with some dirt bike racing.

Recognized as of one of the most famous motorsports venues in the world and the location of arguably the biggest race in the NASCAR series, the Daytona 500, Daytona International Speedway holds a special place in the heart of motorsports enthusiasts. So winning a Supercross race on the hollowed grounds is a very prestigious feat and a milestone in a racer's career.

Unlike the other tracks in the series that are designed and built by Dirt Wurx, for the past 12 years Ricky Carmichael has deigned the Daytona track the racers will compete on. This makes sense seeing as how The Goat has won more Daytona races (5) than any other rider. He pretty much knows the infield of the Speedway like the back of his hand.

WOW!! I WON THE DAYTONA SUPERCROSS!!

Last year Daytona International Speedway added yet another historical fact to its incredible history when at the age of 33, Justin Brayton became the oldest rider to win a Monster Energy AMA Supercross main event in the 450 class. Coincidentally, not only did Brayton become the oldest racer to win a race, but it was also his first career 450 win.

There are only three riders that have won races at Daytona in both the 250 and 450 class: James Stewart, Chad Reed, and Ricky Carmichael. There are currently three racers in the 450 class that won Daytona as 250 guys: Blake Baggett ('11/'14), Marvin Musquin ('13/'15), and Justin Barcia ('12)-if he races this weekend-that could join those elite three. 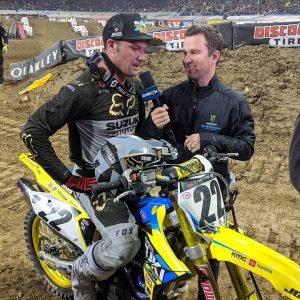 At 36 years old, Chad Reed could surpass Brayton's recent record as the oldest Daytona Supercross winner. If he were to win Reed would join the exclusive ranks of Ryan Villopoto and Jeff Stanton with four Daytona wins. If there is one person you don't want to count out, it would be Reed!

Speaking of Reed, he plays an integral role in one of the best Supercross races in history, which happened to take place at Daytona. During the 2008 season Reed was working on his second SX Championship and was in the points lead over Kevin Windham when the series hit Daytona. Along with the races came a ton of rain that turned the infield into a mud pit. By the time the race started the track looked like Florida's mucky swaps were reclaiming the land. While the racing was extremely exciting with all the riders struggling to either stay on two wheels or to move forward at all-it was more surviving than racing. Reed and Windham battled back and forth for the lead. Between getting stuck, Fred Flinstoning the bikes, and repeatedly stalling, it was a rather slow race. Thankfully before the race started the officials had cut it down to only 12 laps due to the extreme conditions.

On the final lap, with about two turns to go, Reed's (or some mud creature that resembled Reed's physique) bike stalled and began smoking like an angry dragon. Reed was up on Windham by about a minute and as he kicked and kicked to no avail to try and fire the bike back to life, Windham slithered his way closer and closer.


If there was ever a scene that should be incorporated into a reboot of ABC's old Wide World of Sports intro, Reed slumped over his handlebars with his head in his arms in exhaustion is the epitome of the agony of defeat. Thankfully, Reed had lapped the majority of the field, and even though Windham went on to win the race, Reed was credited with 7th place and salvaged some valuable points. He ended up winning his second title at the end of the season by a point margin of only 13 points over Windham.

Lastly, we'll go back to the spectacular sight of Eli Tomac making a mad charge from 6th place to try and catch Ryan Dungey for the win. While Tomac didn't reach Dungey, he put in a remarkable effort and ended the race in second, only a few seconds behind The Diesel. But what really stuck out from that race was the way Tomac skipped across the whoops on his rear wheel. It was like watching a video game highlight. He lifted the front wheel at the start of the whoops and then just seemed to float across from one end to the other with the grace and skill of a ballerina.