(Press release) ARLINGTON, Texas - It was another successful night for the Red Bull KTM Factory Racing Team as riders Cooper Webb and Marvin Musquin dominated the 450SX podium with 1-3 finishes at Round 7 of the AMA Supercross Championship in Arlington, Texas. Webb put forth an incredible come-from-behind performance to seal the deal in the final turn before the finish en route to his fourth win of 2019. Musquin maintains his consistent podium streak with another third-place finish in the class. 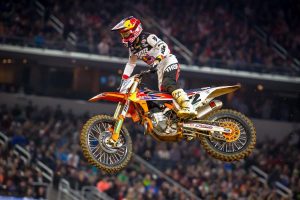 
Webb began the day on fire as he powered his KTM 450 SX-F FACTORY EDITION into the top qualifying position in the 450SX class. In the heat race, Webb got off to a top-five start and passed his way into third to secure a solid transfer into the Main Event. Off the start, he didn't get the best jump as he rounded the opening lap in seventh place. He immediately put his head down and charged through the pack to reach a top-four position by the halfway point. From there, the now four-time race winner continued to climb through the ranks - first battling his way around Musquin, before chasing down leader Ken Roczen late in the race. Webb caught the rear wheel of Roczen as the two-lap card came out and he continued to apply pressure all the way into the final turn. Webb took the inside line to bring himself side-by-side with Roczen as they exited the corner and it was Webb who powered his KTM 450 SX-F FACTORY EDITION through the finish line first, edging out Roczen by only 0.028 of a second. 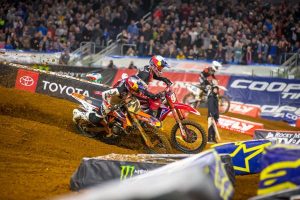 Webb: "Tonight was incredible! I just never gave up out there. It was incredible for it to come to the last lap - the last turn even - and to be able to win with such a close finish was absolutely insane. That's probably the best race ever for me." 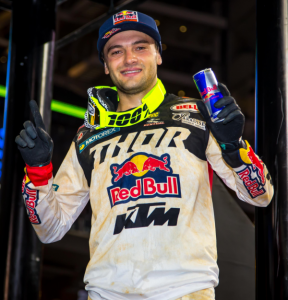 After qualifying third overall earlier in the day, Musquin lined up with his teammate, Webb, in 450SX Heat 2, where he found himself just inside the top-ten off the start. He moved up a few positions during the short heat race and he ultimately grabbed a seventh-place transfer into the Main Event. Musquin powered his KTM 450 SX-F FACTORY EDITION into a third-place start in the Main Event, where he maintained third for the first six laps. Musquin then made his way into second and he chased after the leader for several laps before being joined by Webb for the runner-up position. Webb eventually made the pass for second and Musquin held strong to ultimately secure third overall, giving the Red Bull KTM squad a double-podium for the night.


Musquin: "I had a good pace and I felt comfortable but then I started tightening up a little bit and that's when Cooper caught me. It was too much playing defense for me and he was right there, and then he got me. From there, I had nothing left so I salvaged a third place. It's good, but I was in a good position for better, so I am a little bit disappointed with that but I'm also happy that we were able to turn it around after the heat race." 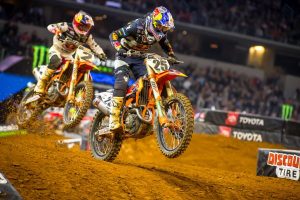 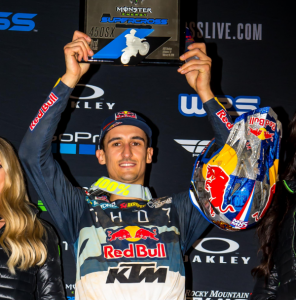 
Troy Lee Designs/Red Bull/KTM Factory Racing's Jordon Smith finished just off the podium in the 250SX East division after battling through a crash in the Main Event. Smith put his KTM 250 SX-F into a top-five position off the start and he quickly climbed into third by lap three and eventually made his way into second. While running second late in the race, Smith had a get-off in the whoop-section and dropped back to ultimately finish fourth in the race. Smith sits third in the 250SX East Championship standings after two rounds.