The kick-off to the 2019 west-coast off-road race season was the Sprint Hero Enduro opener. Held at Glen Helen Raceway, the Sprint format would be a two-day format, with six tests each day. Expanding on the format, there were two separate loops set out: a motocross-heavy test loop and an "enduro" test loop, which used much of the trails in the hills of the Glen Helen park. 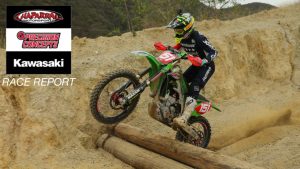 The racers would leave the line one-at-a-time every 15-25 seconds, depending on the test. From there, it's a race against the clock, with each test counting towards the rider's overall (cumulative) time at the end of the weekend. After the final test on Sunday, the results would be simple addition of each rider's test time and lowest total elapsed time wins. 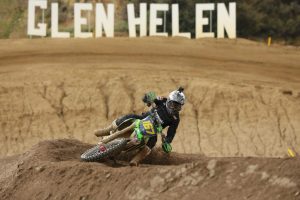 Having joined the team less than a month earlier, this would be Zach's first test on the new KX450. In the moto tests, Bell's motocross upbringing definitely shown through as he won all three moto tests on Saturday. In the enduro tests, Zach built into the pace and came away with third on the day behind Taylor Robert and Gary Sutherlin.

Overnight rain made for a slightly sloppy moto test in spots, but the result was the same as the previous day, with Zack posting the quickest time in all three tests. Bell was right on pace in the enduro test as well and had closed the distance on second overall for the weekend. At one point in the final test of the weekend, Zach had closed enough to overtake the second spot. Unfortunately, a small mistake in a rock section cost just too much time and Zach would finish the weekend in the final podium position.

"I feel really good on the bike. Yeah, Saturday was good, I won all three moto tests. Went to the enduro and just struggled a little bit in the rocks and lost some time. But I made up a lot of time today [Sunday]. Getting comfortable with the [new] bike is definitely going to be key for me. [Today] I started taking some better lines and charging a little bit harder and found myself pretty close to Taylor['s times] on the enduro loop. So' I'll keep working on that. But, first race of the year, third isn't bad, so we'll just keep going from here." 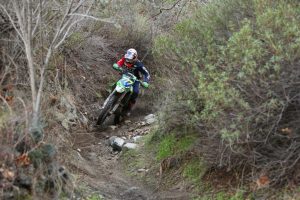 Blayne was excited to get the season started on the all-new Kawasaki KX450 and showed great speed in Saturday's moto tests. Thompson was just a second or two off the podium positions through the opening three tests. After the first enduro test, Blayne was sitting fourth overall, but an unfortunate incident on the second enduro test cost him any chance of a great overall result. Blayne's bike suffered damage to some of the electrical wiring from a stout tree branch, which killed his bike. After huffing it back to the pits, the Chaparral Motorsports, Precision Concepts, Kawasaki team fire-drilled to get Thompson back out on course before the finish of the test. Though he was able to get a finish, the amount of time lost set him to the back of the staging order and effectively ended his shot at a top-5, let alone a top-10 finish.

Blayne regrouped for Sunday and showed good speed, again slotting in right at the edge of the podium contenders. On the day, Thompson's test times had him placing fifth, just a few seconds from the rider ahead. However, because of the time lost on the second enduro test the previous day Blayne's overall time saw him take 12th overall on the weekend.

"Overall the sprint enduro was pretty fun. I just have to learn how to get the sprint speed down every lap. We're going to keep working on that. The moto tests [Saturday] were pretty good. I was fourth every time. I'm not a moto guy anymore [laughs], that was back in the eighty days, so I've got to get used to that stuff again. [On the mechanical] I jumped off the side of the bike and had to wait for the track crew to come and get me to pull me out. But Factory Phil got the bike fixed so I could finish the second loop, a little late, but we'd rather take that than a DNF.

"The enduro conditions [for Sunday] were epic. For the moto, the first one was a little slick, second one was better, then the third was actually pretty good. The new section [carved into the side of a hill] was pretty cool. One section was a little scary because it shot keft down a hill. I came in a little hot and almost went off [into the bushes] but stayed on the track and rode it out. I feel pretty good [about the weekend], I know I can do better, but for my first [enduro I didn't do too bad so we're going to see what we have at the next ones." 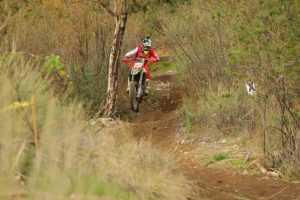 Clay was right at the top of the Open A leaderboard all day Saturday. A handful of riders traded top times, with Hengeveld slotting in third after the first day's moto tests had completed. Consistent times through the first two enduro tests saw Clay take the lead in class. However, during the final test on Saturday, Clay clipped a rock and hit the deck, his back landing on its bars. Hengeveld was fortunate to escape the crash without any physical or mechanical damage, but the time lost dropped him to third in Open A heading into day two.

Unfortunately, Clay's chance at the class win was over nearly before it began, as a freak mechanical issue cost Clay time on Sunday's opening moto test. Luckily, it was a quick fix and the team was able to get Lil' Henge. However, like his teammate the previous day, the damage was done regarding Clay's overall finish. Clay continued to show his speed, placing inside the top-3 throughout the remainder of the test, but in the end, he'd have to accept a 12th place finish on the weekend.

"I thought the format was pretty cool. It's something completely different than what we're used to, so it was fun. Saturday went pretty well. I was right there with the top guys in Open A, we were all right there within seconds. That definitely made you push a lot and I had some good rides. [Sunday's] conditions were awesome, especially out in the single-track. The moto track was a little slick. And unfortunately, on the backside of REM my bike died and I pushed it back to the rig. We got back out there, but unfortunately, my time was pretty rough and that hut me for the day. But overall it was a good weekend. I learned a lot and just want to keep progressing."

"The Sprint Enduro format is a new one for us and many of the riders. It's a really cool format, more of a race against the clock. There's definitely a different dynamic to the race weekend and a slightly different skill-set involved as compared to a traditional grand prix-style race. Our riders seemed to enjoy it for sure. It was our first race on the all-new KX450 and it showed to be a great base. We're still learning the bike and the potential is going to be unreal.

"Zach showed great speed all weekend and if not for a couple late mistakes, could have been one step higher up the podium. Unfortunately, we had a couple issues with Blayne and Clay that cost them so big. We learned that even a minor issue or mistake over twelve tests is amplified when the riders are separated by mere seconds. I feel the series as a whole is going to be a success and we'll have fun chasing it this year."