Watch This Jerk Kick Over A Motorcycle For No Reason

A motorcycle enthusiasts' most prized possession is...well, their motorcycle. And nothing is more nerve-racking or scarier than having to leave your pride and joy out of your sight, and alone in a dark parking lot. There are a lot of nefarious people in the world who are looking for an easy come up or just enjoy messing with other people's property for no reason and a lonely motorcycle can be ripe for the picking. While a motorcycle disc lock or chain may not be the end all be all solution to making sure a motorcycle doesn't get stolen, using some sort of motorcycle security device is at least a good deterrent that may cause a thief to rethink the situation and hopefully move on. 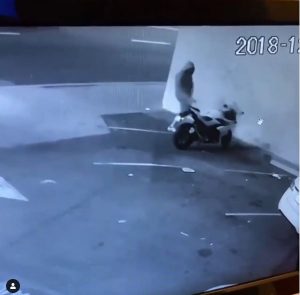 Unfortunately, in this video sent to us by one of our former employees, Dalton Bennefield, a motorcycle lock wouldn't have done much to prevent what this coward chose to do to Dalton's motorcycle. Dalton told us this took place in San Bernardino at about 7pm on December 19th. He parked his 2018 Suzuki GSXR250R in the side parking lot of a local business and locked the steering column. Then when he came back he saw his bike lying on its side.

It sucks to see stupid stuff like this! . This video was sent to us by one of our old employees, @dalton_benne. Thankfully his bike only suffered minor damage. Dalton shared this video with us because he just wanted to help people remember that your motorcycle is never safe when out in public and to do what you can to protect it. . #bummer #norespect #motorcycle

Looking around the parking lot Dalton spotted a security camera and asked the manager if he could see what happened. The manger played back the video and that's when Dalton saw what appeared to be a male and female walking past the parking lot. He then watched in shock as he saw the male flip his hoody over his head, wait for the remaining car to leave the lot, and then walk over and simply kick his bike over for absolutely no reason.

As you would expect, Dalton was pretty pissed but also confused when he saw the guy give his bike a front kick and knock it to the ground. "It happened just a few minutes before I walked out to go home, so I couldn't imagine if I saw it happen. My blood was boiling," Dalton told us. "I just thought, like why would some random dude just kick it over for no reason at all? What's the point in that?"

Unfortunately, Dalton still doesn't know who kicked his bike over and even though he did file a police report, he says the chances of catching the guy are probably pretty slim. Fortunately however, the bike didn't suffer any major damage. The right bar end was busted and the mirror was scraped up. Other than that the handlebar and footpeg helped keep the right side bodywork from getting messed up.

While the Kryptonite Series 4 Disc Lock Dalton uses might have discouraged a thief from stealing his motorcycle, unfortunately there wasn't much the lock could do in this situation. Dalton told us he wanted to share this video with us because he wanted to remind people to be more aware and to keep an eye on their motorcycle whenever possible.