(Press release) MURRIETA, Calif. -  As the world anticipates the start of the 2019 AMA Supercross Championship on January 5, KTM North America, Inc. is pleased to announce its KTM 450 SX-F FACTORY EDITION MY19 - the pinnacle of KTM's motocross line. The latest model offers a host of upgrades over the standard machine with technology and equipment that make the machine as factory as it gets. 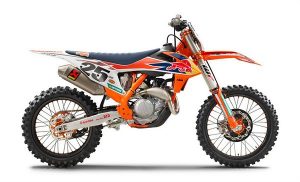 With KTM's incredible success in the Supercross and Motocross Championships around the world, the KTM 450 SX-F FACTORY EDITION is a performance driven five-speed model that is only produced in limited quantities for certain markets. The latest 2019 model forms the base of the machines that will be raced by Red Bull KTM Factory Racing's Marvin Musquin and Cooper Webb in the upcoming AMA 450SX and 450MX Championships. Thanks to the Austrian brand's racing passion and expertise, this limited-edition model is created to be one of the most READY TO RACE machines available from KTM. 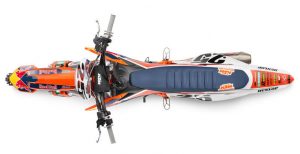 "The KTM 450 SX-F FACTORY EDITION is a World Championship-proven machine and the clear weapon of choice for the Red Bull KTM Factory Racing Team. This model truly embraces KTM's 'READY TO RACE' philosophy and the company continues to prove its commitment through R&D and feedback from the racers themselves," said Team Manager, Ian Harrison. "Since 2016, Marvin Musquin has achieved great successes on the KTM 450 SX-F FACTORY EDITION and we are setting our sights on big things from him in 2019. Cooper Webb is a great addition to the team and he has settled into the new bike quite nicely, so we look forward to great things from him this season as well." 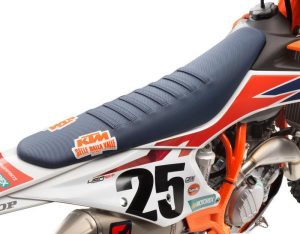 Encompassing the latest motocross technology, and developed with the highest out-of-the-box race performance in mind, the KTM 450 SX-F FACTORY EDITION enjoys an array of special features. The machine has the ultimate factory look with its orange frame, Factory seat with Selle Dalla Valle logo, and exclusive 2019 Red Bull KTM Factory Racing graphics that are all complemented by various engine upgrades and improved suspension settings.

With racing at the heart of KTM, this model is the sharpest weapon in the toughest racing arenas and the 2019 FACTORY EDITION provides performance-enhancing features such as an AkrapoviÄ Slip-on silencer, orange anodized Factory triple clamps, Factory wheels with D.I.D. Dirt Star rims, a Factory start for the fork and a composite skid plate. In addition, the bike has a semi-floating front disc, front brake disc guard, and an orange rear sprocket. KTM expects nothing less than victory with the KTM 450 SX-F FACTORY EDITION for its athletes and for those who choose to race it.