It's hard to describe in words the size and scope of the Day in the Dirt event to someone who didn't attend. Held at Glen Helen, and presented by Red Bull and Fasthouse, it's touted as the fastest party in town. Additionally, it's probably the largest. Each race seemed to have 150-200 racers entered, some taking it seriously and some just there for the good vibes and great times. For the Chaparral Motorsports, Precision Concepts, Kawasaki Team Green crew, it was a bit of both. The riders went out to enjoy the event as an exhibition, but had some great rides in the process.

Blayne Thompson had a stellar weekend, entering five events and taking home three first-place finishes and runners-up. In what was probably one of the biggest ironman efforts, Justin Seeds raced seven events. From those seven, Justin was only off the podium once individually and took home two wins. Additionally, Clay Hengeveld raced five events, taking three wins home with him. 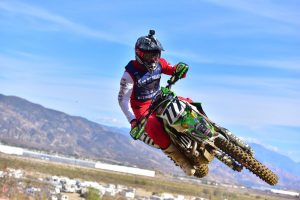 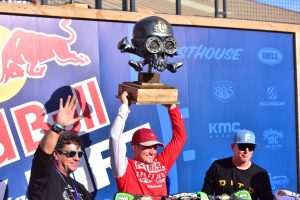 Blayne was consistently one of the fastest racers all weekend long. In what was an exciting event for spectators with such close racing, he and Justin Seeds teamed up in the Stunt GP.  The two finished literally a bike-length behind the winning team of Deegan Vonlossberg and Trevor Stewart. After that was the Bossa Nova team GP. To explain, the Bossa Nova is a three-man team race, but each rider is on the track at the same time. Similar to Motocross-of-Nations, the three rider's finishes are totaled and lowest scoring team wins. Blayne put in a great performance, finishing second and helping the team take the win. Then, Thompson backed that up with a win in Saturday's Pro/Am GP.


Blayne had a great ride in Sunday's Pro/Am GP, finishing second to his teammate, Justin Seeds, but always had an eye on the weekend's finale: The Coup De Grace. After taking the lead on the first lap, Thompson was pushed all the way to the checkers by his Team Green teammate, Seeds. But in the end, Thompson came away victorious, capping off a stellar weekend. 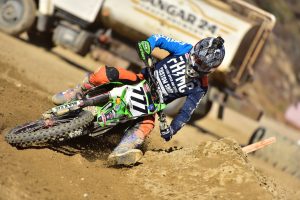 "I've been doing [this event] since I was on 80's, probably ten years. Like the Adelanto GP to me, it's an awesome event and I look forward to it every year. This year's event was really good. The track layout was awesome, definitely no complaints there. For me, Saturday went really well. I had a few little mistakes throughout the day. But no crashes and came out with a win in the Bossa Nova [as a team] and Pro/Am [GP] and second in the Stunt GP. So, we couldn't complain about that. Sunday went really good too. I battled with Justin in the Pro/Am [GP] in the morning, then high-sided in a corner and went down. But I came back and got second in that one. Coming into the Coup De Grace, I just cleared my head. I said [to myself] I needed a good start, then I got the holeshot and held it the whole way." 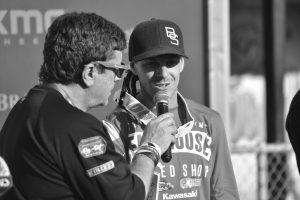 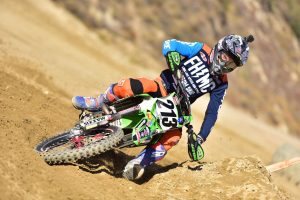 Justin Seeds surely deserved the ironman award this weekend. Justin entered seven events, finishing off the podium just once individually in the Bossa Nova. To kick it off, Seeds pulled his 2003 KX250 out for the two-stroke revival, finishing just a bike-length behind Willy Simons in a close battle for second. He then teamed with Blayne in the Stunt GP, where the riders switched arm bands each lap, and took second. He rounded out Saturday with a fourth-place individual finish in Bossa Nova and a second in the Pro/Am, where he was just a wheel-length behind his teammate, Thompson at the checkers.

Seeds shook off some soreness and sent it Sunday, taking a win in the Pro/Am GP. Then, he and Clay partnered up for the Moto-A-Go-Go team GP. Similar to the Stunt GP, the riders alternated laps, switching an arm band each time. In that event, he and Clay came from outside the top-ten on the first lap to take second place. However, with how packed the racing schedule was, Justin and Clay hadn't informed registration that Clay was stepping in for Blayne (who was the scheduled rider on the entry). In the end, registration gave the team a DNF for the oversight. In the Coup De Grace, Justin pushed his Kawasaki teammate hard, but a fall on the second-to-last lap took the wind out of his sails and he settled for second. 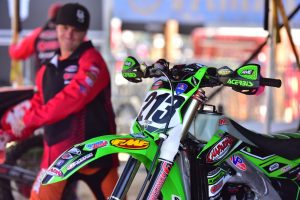 "The last time I did this event was back when it was at the original LACR [LA County Raceway]. It was a lot of fun. [The vibe] is completely different than anything else we go to. It's really professional for more of a 'go out and have a good time' kind of race and the people are really cool. My Saturday went really well. I started with the two-stroke, which was kind of hairball because I didn't really have any time on it. But that was fun. Then, I jumped straight into the Stunt GP, which I didn't realize I was racing until Blayne told me just before we had to go to the line [laughs]. Then, [in] the Bossa Nova team race I rode really well there and we ended up winning the team race. Wrapped it up with the Pro/Am and I think Blayne and I were like half a second apart at the finish. 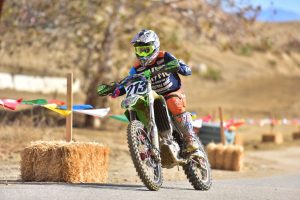 "Sunday, [the body] was a little tight, but I stretched it out and was good. In the Pro/Am GP I got the holeshot and was able to kind of walk away from that one. Then, we went into the Moto-A-Go-Go with Clay. We got close to the lead, but then unfortunately Clay had a little tip-over. But we were still able to get second. Unfortunately, through poor communication, we didn't let registration know we were switching to Clay racing instead of Blayne. So, we ended up getting a DNF. Then, we went literally straight into the Coup De Grace. They tried to fool us on the start and I wasn't ready at all. I think I was like sixth, then I got into third behind Toby [Price]. I got by Toby and charged and got into the lead for a lap when Blayne pitted. Tried to put in a charge after I pitted, but ended up crashing, which took the wind out of my sails and I settle for a second. But I have to give it up to my teammate Blayne for riding well all weekend, making for some good racing and giving the crowd a show." 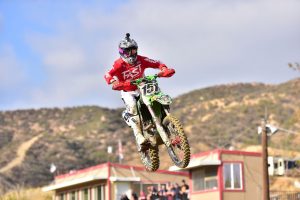 Clay's weekend started in a rush. Unable to arrive at the event until mid-morning Saturday, Clay nearly had to step out of the car and onto the bike for the Bossa Nova GP. Henge was dressed and ready in the car, though, and did just that. He went out in the Bossa Nova, blind without any practice, and was able to finish ninth, which helped the team get the win. Then, he turned around and took the win in the 450-expert class in Saturday's Pro/Am GP. Hengeveld back that up in Sunday's Pro/Am GP, taking the 450-expert victory once again. He made the quick turn-around for the Moto-A-Go-Go with Seeds, and then the ultra-quick turn-around for the Coup De Grace. Clay was in the hunt with the eventual third-place finisher early, but a few mistakes set him back. He capped off an action-packed Sunday with fifth in the finale. 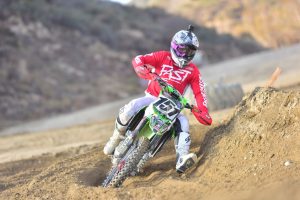 "This was my first Day in the Dirt. I've always wanted to come out to this race and see what all the hype was about and I was stoked to be able to do that this year. I thought it was a really cool event. Yeah, it's racing, but you don't have to take it too seriously and you have a fun time with all your friends and family. Saturday went decent for me. I was fresh out of the sprinter van for the Bossa Nova [laughs]. We ended up winning that, which was pretty cool. I got really bad arm pump from being straight out of the van and on to the bike. But then I was able to take the win in the 450-expert class, so it was good. 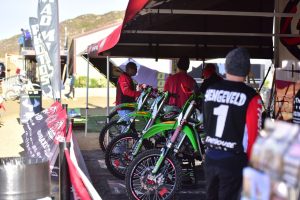 "Then, on Sunday Justin and I did the Moto-A-Go-Go and I actually felt the best I did all weekend in that race. That one was cool because we switched every lap. So, we all got to basically throw down a heater, then take a break. In the Coup De Grace, I struggled a little bit. I struggled in the corners, keeping my eyes up. It didn't go that well for me, but I was glad to go out there and learn more. I ended up fifth and had fun."