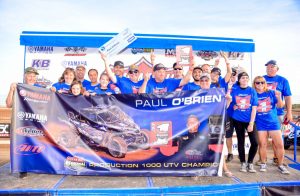 Controlling the field throughout the season by finishing first in all but one race, O'Brien secured the Production 1000 class victory and Yamaha's $5,000 bLU cRU Championship Bonus in his YXZ1000R with a total of 319 points. The only person to stop O'Brien's first place dominance was fellow bLU cRU racer Jason Weller, who won the final round in his Weller Racing YXZ1000R. Thanks to a strong run at the last two rounds, Weller jumped to third overall in the series' Production 1000 class, nearly besting fellow YXZ1000R racer Will Munns who rounded out the podium in second place. 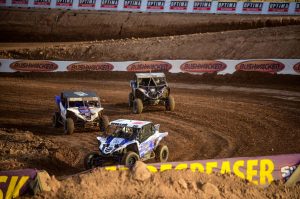 "O'Brien's performance this year in his YXZ1000R was phenomenal, being the only racer to consistently finish on the podium in all six rounds of the series," said Donnie Luce, Yamaha's off-road racing coordinator. "Along with all bLU cRU racers, we congratulate O'Brien on a great season and additionally look forward to having him join the ranks with many other Yamaha racing legends next month as we add him to Yamaha's prestigious Wall of Champions."