The OHV trails of Hungry Valley hosted the penultimate round of the 2018 BIG 6 championship. Heavy winds made for some dusty sections, but the Prospectors MC did their best to keep the conditions race-able. The weekend left many with heavy hearts with the unfortunate passing of a fellow racer. Our hearts and thoughts are with his family. To add, the support of the racing community at the event shows how close-knit this industry is. We're a family. 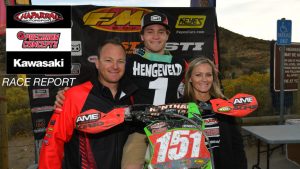 For Sunday's pro race, each of the Chaparral Motorsports, Precision Concepts, Kawasaki Team Green racers got off to great starts. Justin Seeds took the holeshot, leading for two laps, before coming home third. Additionally, Blayne Thompson nearly took the holeshot, exiting the first turn just behind his teammate. Blayne was up front early before an issue relegated him to sixth. In the pro 2 class, Clay Hengeveld lead from start to finish, claiming his sixth win of the season. On top of that, Clay was able to clinch the pro 2 championship a round early. Mirroring Clay's weekend, team manager Robby Bell lead wire-to-wire in the Vet AA race, clinching that championship with one round remaining. 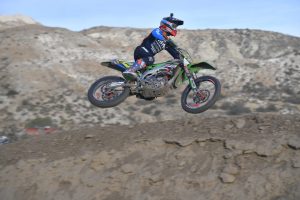 Justin wasn't the lead rider to the first turn, but a quick pivot as the front-runners ran wide gave him an uncontested holeshot. Seeds lead the first couple laps and kept his KX450 inside the top-three for the entire ninety minutes. The third-place finish was Justin's best of the year as he finds his best form late in the season. Additionally, Seeds has moved to within striking distance of the final podium position in the standings. 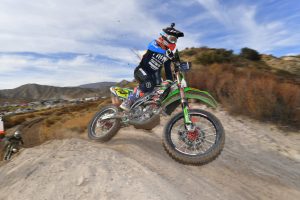 "After the last round [Primm WORCS], I had a lot of confidence, especially with the way I rode. I knew I could be up there. So, I was like, 'Alright, let's get a podium.' I knew if I could get a start, it would be easier, especially since Gorman can be dusty. I was able to pull the holeshot and lead pretty much the first two laps. Then I had a couple good races with Zach [Bell] and Trevor [Stewart].

"When the sun started going down I maybe played it a little safe. With not being able to see, I didn't want to take too many chances and take myself out of the race. So I tamed her down a little bit, but was still able to stay not too far behind Trevor. I was definitely happy with the way I rode. Just wish I could have done that the whole year." 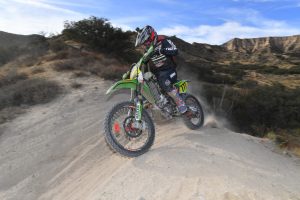 Thompson lead the pack to the first turn before being overtaken by his teammate just prior to the holeshot stripe. Blayne settled inside the top-three early in the race before an issue with the controls on his bike had him come in for an untimely pit stop. Thompson dropped back to seventh after the early pit. From there, the Kawasaki rider pushed back up inside the top-five. However, even though the team had gassed his bike in the early pit, Blayne would be forced to come in on the final lap for a splash of fuel. Thomson would rejoin the race in sixth, holding the position to the finish. 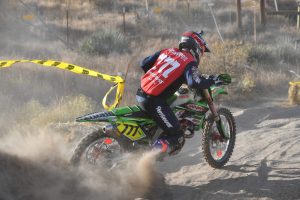 "Coming into Gorman, the goal was to get a good start, get up front. We wanted to try to battle with all the leaders and actually lead it myself. I was kind of able to do that. We started up front and ran behind Justin [Seeds] for a little bit. Then we had the small issue and I had to come into the pits early and fell back.

After [coming out of the pits] I felt pretty good. I rode a little conservative feeling the bike out. Then I started to send it for a few laps to catch back up. I don't know how much we really caught up, it felt like a little bit, but just wanted to keep pushing. There's nothing we can do about it but fix it and come back for the next one." 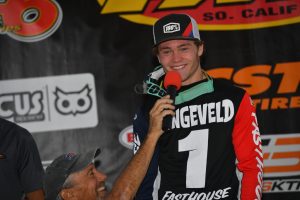 Clay had the perfect day at Gorman, taking the holeshot and pulling away nearly every lap to the checkers. Not known for stellar starts, Hengeveld commanded the first corner and pulled an instant gap through the infield motocross section. From there, Clay continually stretched his lead to the finish, amassing a gap of nearly two minutes at the checkers. In addition, the win clinched Clay's first AMA BIG 6 pro 2 championship of his career with a round to spare. 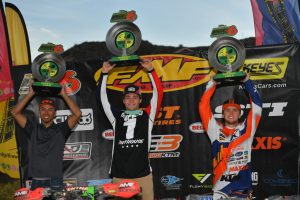 "Going into Gorman I had my eyes set on winning the pro 2 class. To be honest, though, I was a little nervous on the starting line. I don't know why I was a little nervous, but I was able to get the holeshot and lead from start to finish. Usually my starts aren't the greatest, but to get a holeshot actually felt really good. I didn't have to pick my way through anyone, I was able to be out front and charge the whole race.

"It feels amazing [to wrap up the pro 2 championship]. I've worked hard for that. I've been in the pro 2 class for about three years now and to wrap it up a round early is pretty awesome. I'm very proud of myself and I just can't thank everyone around me enough, Robby, Bob, Factory Phil, and Chaparral Motorsport, Precision Concepts, Kawasaki for everything."

"Overall it was a fantastic weekend. Gorman is a place where the start can be critical. So, watching all three riders right up front through the first turn was a great moment. I was shouting and high-fiving after all over the place. Clay absolutely crushed it today. He's been dominant in the pro 2 class this year and earned every bit of that number-one-plate. Justin is really coming into his own late in the year. It was great to see him want the holeshot the way he did and then put in great lap times throughout the race. Blayne just hasn't had a break the past couple races. It was really unfortunate he had to come in early, but he's a tough kid and I'm confident it'll turn around for him soon."

*not including one mandatory throw-out