If there's one thing we like more than all the new model announcements at the EICMA show, it's the concept motorcycles that get debuted at the show. Take for example these two little gems from Honda's Rome-based R&D center. Housed in Big Red's "Design Studio" section of their EICMA display, Honda continued to show its love for mini motos with the reveal of a 125cc ADV inspired bike, dubbed the CB125X, as well as a 125cc supermoto called the CB125M. 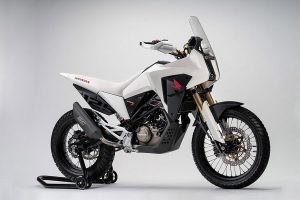 Style-wise Honda's lineup of pint-sized petrol sippers already covers the gamut of sporty to retro with the highly popular Grom and recently (re)-introduced Monkey and Super Cub. So while these two bikes are only concepts they would round out Honda's 125cc family nicely.

Featuring an aggressive fairing with a narrow wind screen shooting straight towards the sky-a-la it's bigger distant relative the Africa Twin-the front of the 125X screams ADV bike. However, the 125X's fairing has sharper and more angular lines. Lighting abounds with a vertically mounted rectangular headlight sitting front and high center on the fairing and two smaller triangular lights flushed into the wings in either side. 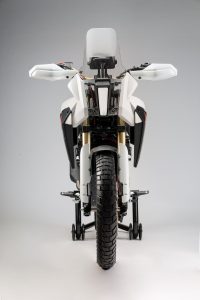 The seating area on the CB125x fits the bill for offroading with the rear of the seat angling slightly upward and the front extending up on the tank a bike to provide the rider plenty of room for maneuverability to traverse over difficult objects and terrain. The requisite protection is in place for doing the dirty stuff as well with fork guards, hand guards, and a skid plate covering the exhaust header. While the tires aren't overly aggressive, they're shoed onto spoked wheels and would be be suitable for exploring fire roads and some moderate single track that isn't too muddy.

As for the CB125M concept, with its smooth and compact bodywork hugging the frame it looks like a razor sharp pocket knife ready to carve its way into some fun. The supermoto inspired machine is minimal in just about every aspect to save weight and keep things sleek. Even the hand guards provide just barely enough coverage to protect the hands. The M also sports a skid plate and fork guards like the X but instead of dual sport tires it's outfitted with a pair of 17" slicks wrapped around the same set of cast aluminum wheels found on the CB125R.

Again these are just concept bikes, so whether we will actually see them hit the road or dirt is still to be determined. However, based on the recent success of the smaller displacement bikes that are hitting the market, and the fact that the Super Cub and Monkey were recent concept bikes we just might be seeing these two sometime soon.