Do you have one of those new cars that notifies you when there is a vehicle in close proximity or in the lane next to you (maybe in your blind spot)? That's great that vehicle manufacturers are making an effort to try and make cars and trucks safer. But what about motorcycles? Does your motorcycle let you know if there is someone coming up behind you or is on the side of you? Better yet, can your car or truck detect the presence of a motorcycle in your close vicinity? Probably not. If the recommendations offered up the National Transportation Safety Board (NTSB) in a recent safety report are taken into consideration that could all change. 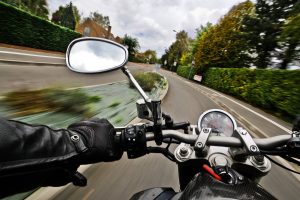 Last month the NTSB released a report titled Select Risk Factors Associated with the Causes of Motorcycle Crashes. The report was based on data from the 2016 Motorcycle Crash Causation Study (MCCS), which was conducted by the Federal Highway Administration (FHWA) and gathered information from motorcycle crashes that occurred from 2011-2015 in Orange County, California. In their safety report the NTSB outlined several key issues affecting motorcycle safety, their findings based on the data analyzed, and then offered recommendations to National Highway Traffic Safety Administration, FHWA, Motorcycle Industry Council, and American Motorcyclist Association on factors that could improve the safety of motorcycle riders and passengers.

Now before getting into the safety issues, findings, and recommendations offered up by the NTSB it should be noted that according to the Safety Report, the data that was obtained from the FHWA's 2016 MCCS was the most recent data available for studying motorcycle crashes and risk factors in the US since the Hurt Report was released in 1981. Officially known as the Motorcycle Accident Cause Factors and Identification of Countermeasures report, the study became commonly known as the Hurt Report named after its primary author, Professor Harry Hurt.

Within the Hurt Report was a list of more than 50 findings with one of the most significant being that "The failure of motorists to detect and recognize motorcycles in traffic is the predominating cause of motorcycle accidents. The driver of the other vehicle involved in collision with the motorcycle did not see the motorcycle before the collision, or did not see the motorcycle until too late to avoid the collision." This is important because nearly 40 years later, this still a major factor in motorcycle accidents, according to one of the key findings in the NTSB report. "Many high-risk traffic situations between motorcycles and other motor vehicles could be prevented if vehicle drivers were better able to detect and anticipate the presence of a motorcycle when entering or crossing a road, making a turn, or changing lanes." 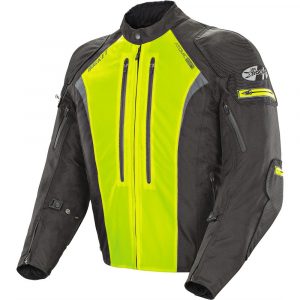 We hear it all the time, "I didn't see the motorcycle." or "The motorcycle rider came out of nowhere." Even with the proliferation of high-viz motorcycle gear like helmets and jackets, due to their smaller overall size, riders frequently get overlooked by drivers . On the positive side, technology has significantly advanced in 40 years and many new automobiles are now outfitted with vehicle detection and collision avoidance systems, however, as noted in the NTSB's report regarding motorcycle safety issues, not enough of these systems are designed to recognize the smaller size of a motorcycle.

It would seem odd that the company's developing these warning and crash prevention systems aren't putting the same priority on motorcycle detection as they are for other vehicles or structures. On the flip side, it's odd that vehicle detection and collision avoidance systems haven't become more common technology used on motorcycles.

Bosch, one of the major players in ABS systems for motorcycles, however, has been working on and developed a myriad of technologies to make motorcycling safer with radar and alert systems that would either warn the rider of surrounding vehicles or even adjust the speed of the motorcycle to maintain a safe distance in traffic. The company has stated that KTM and Ducati will begin incorporating these innovations in future models sometime around 2020. The ability for a vehicle that's about to make a left hand turn detect an oncoming motorcycle, or a motorcycle that can warn a rider that a vehicle may be making a turn would be a huge leap forward in motorcycling safety and save many lives. 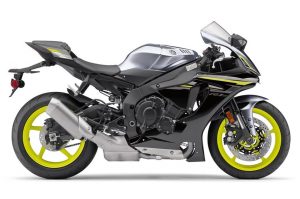 Anti-lock braking (ABS) was another topic that was discussed in the NTSB report. ABS has been required on all passenger vehicles in the US since 2000, however there have been no such requirements for motorcycles. Starting in 2016 Europe required that all motorcycle over 125cc be equipped with ABS, and while the technology has been incorporated as standard equipment on some motorcycles offered in the US that group represents less than 10%. The NTSB report recommends to the NHTSA that ABS be required on all new on-road use motorcycles. Stability control systems for motorcycles were also brought up in the report, which again some motorcycles offered in the US are either offered with as standard equipment or as optional equipment.

Motorcycle manufacturers have been integrating ABS, stability control, and traction control into more and more models offered in the US, however, these technologies add dollars to the bottom line of a motorcycle and therefore have typically been offered on more premium or higher performance bikes. Add in the cost of incorporating vehicle-to-vehicle/structure detection systems into the electronics of a motorcycle and the cost for a new bike climbs even higher.

Motorcycle sales have been slow moving for the past few years. And with the younger generation showing less interest in motorcycling than generations prior; and many new potential buyers are already burdened with student loan debt, mandating these new technologies across the board on all street motorcycles would drive up the prices of even the cheapest bikes and drive a wedge even further between motorcycle ownership and new riders. Building safer, more technologically advanced motorcycles while still keeping prices low to attract new, young riders will definitely be a challenge for manufacturers.

One of the most interesting topics brought up in the report was motorcycle licensing procedures and their effectiveness. Basically what was stated is that it's unknown whether a person who goes through the process of obtaining a motorcycle license is a safer rider and less likely to have a motorcycle accident.

In California, those over the age of 15-1/2 and under the age of 21 who wish to get a motorcycle license must hold a learners permit for six months and are required to complete the California Motorcyclists Safety Program (CMSP) administered by the California Highway Patrol. The 15 hour program consists of five hours of classroom instruction and 10 hours of actual riding in a closed course setting. Besides getting professional and safe instruction, the upside of the CMSP is that after the six month permit period is over the DMV will waive the skills portion of the riding test for licensure.

For those over the age of 21 however, they must pass the written test to get a learners permit, but then once they have a learner's permit can schedule a motorcycle driving test. The motorcycle skills test you must pass to get a motorcycle license involves four parts: 1. Control Identification, 2. Serpentine and Circle, 3. Slow Ride and Circle, 4. Gear Shift Ride.

The control identification is pretty self-explanatory and shows the test administrator that the motorcycle works properly and that the rider is familiar with the controls. Test two involves weaving between a series of cones and making two laps around a defined circle at the end of the cones without the front tire rolling over the inside or outside line, then weaving through the cones again on the way back to the starting point. With test three the rider has to slowly ride between two lines and ride two circles in the opposite direction without going outside the lines and then return back between a set of lines. Lastly, the tester has to ride down to a set of cones, shifting up twice and down twice, make a turn and then return back to the start again shifting up twice and down twice. All these skills must be completed without dabbing the foot or stopping mid test in order for the rider to pass.

While the skills test does prove that the rider is capable of handling the motorcycle at low speeds in a closed course environment, it does nothing to demonstrate the rider's ability to deal with pedestrians or other vehicles on the road. Nor does is show how they would react to real on-road scenarios that require quick and safe maneuvering. Granted the driving portion of the driver's test only gives the test administrator about 20 minutes of seat time with the applicant, but at least they can get a feel for how confident the driver is with others on the road and how they deal with those interactions. 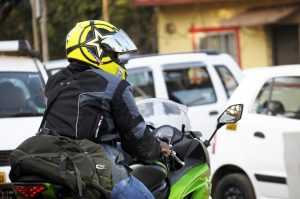 One seemingly effective solution to improving rider/driver training and overall road safety that wasn't mentioned or recommended in the report is the use of virtual reality riding/driving simulations. With the advancement and affordability of virtual reality technology it would seem implementing training sessions for all motorcycle and driver's license applicants could greatly improve their reactions to different settings and scenarios. If applicants were having difficulty in a certain area, say, recognizing or acknowledging motorcycles, then the training session could be customized to put an emphasis on motorcycle traffic. Or if a rider continually blew through intersections without taking into consideration the possibility of an left turning car, the simulator could force the rider to reduce the speed and look ahead for possible trouble spots-and vice-versa for automobile drivers. Also, with lane splitting now being a legal activity in California a virtual reality simulator could greatly improve a driver's reaction and help them become more accustomed to a motorcycle riding in between their vehicle. This could also be used to show riders how to properly and safely navigate their way between lanes in heavy traffic and how to maintain proper speeds when splitting lanes. The possibilities are endless.

This safety report, its findings, and recommendations from the NTSB are good signs for the motorcycling community. While everyone may not agree with some of the ideas or recommendations, and the thought of incorporating new safety technologies into motorcycles and possibly increasing prices may not sit well with manufacturers or some riders, at least it shows that there is concern and interest in making the roads safer. You can read the full report here.