The Monster Energy/Yamaha Factory Racing Team switched gears to supercross racing on Saturday as Justin Barcia took on the 2018 Monster Energy Cup (MEC) in Las Vegas. In a unique format of three, 10-lap Main Events, Barcia overcame rough starts and a crash in the final race to ultimately battle his way to a top-five finish in the premier Cup Class. 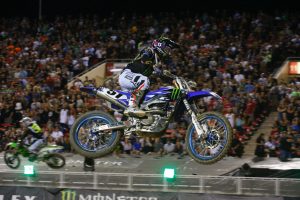 In Main Event 1, Barcia got off to a sixth-place start and immediately went to work moving into fifth position. He battled just outside podium contention for a majority of the race, making a valiant last-lap pass to finish fourth. In Main 2, Barcia had a great jump aboard his YZ450F but he got pinched off before the first turn. Beginning his charge from outside the top-five, Barcia fought his way through the pack to finish second in race two. As the gate dropped for the third and final Main Event, Barcia got pinched off once again and went down in the first turn. Quickly remounting, he charged his way from nearly last on the opening lap to ultimately climb his way up to a seventh-place finish.

Barcia's combined finishes of (4-2-7) gave him a tying score for third overall, but the tie-breaker awarded him with fourth, only one-point shy of the runner-up spot.

One of the biggest storylines of the weekend was Yamaha bLU cRU rider Ryan Villopoto making an appearance in the premier Cup Class. Riding aboard the YZ450F, Villopoto put forth a consistent performance throughout the evening's Main Events to ultimately finish thirteenth overall.

"It was not a bad day for the Monster Energy/Yamaha Factory Racing Team. Obviously, we came here to finish on the podium and contend for a win but Justin rode solid all night, fought back from rough starts, tied for third overall and ended up fourth. A little disappointed with that, but we came a long way this season and we've got some work cut out for us. We're looking forward to the off-season."

"Coming into the weekend, I only had a couple days of riding Supercross and getting back into it so I felt okay in practice, but a little tight. In the Main Events, I never had great starts, unfortunately. I struggled with that a little bit but there are a lot of positives to take out of today with the little bit of time we had to get ready. We had really good bike - our setup was awesome - so that makes me happy going into the Supercross season. My fitness felt awesome, too, so I would say that where I was at this time last year to this year is really positive."

"Everything was good, it was really fun to be here racing the Monster Energy Cup. The track was tricky in that there was nothing to really separate a whole lot of us. All-in-all, the fans had great time and I think they all loved me being back out there. Sure, I would have loved to do a little bit better but what more could I ask for with three weeks on the bike. I think I did my job with the media and the big hype that was around me when we came out here, so it was a good time."