) Foothill Ranch, Calif. (October 14, 2018) - Las Vegas is a place known for risk taking and defying the odds, and on Saturday night that is exactly what the Monster EnergyÂ® Kawasaki team did as Eli Tomac became the first two-time winner of the Monster Energy Cup, and captured the "Monster Million" by sweeping all three races. Racing in the premier class for the first time was the No.17 of Joey Savatgy, whose textbook starts and consistency throughout the night was able to land him on the podium in third place overall. 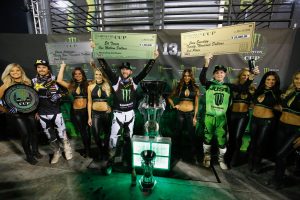 Monster Energy Kawasaki's Eli Tomac started the day out by qualifying second for the night program, while teammate Joey Savatgy followed close behind in fourth position. Also joining the team for the weekend was No. 43 Tyler Bowers, who qualified in 13th place. As the sun set and the fans packed the stadium, the stage was set with a million dollar prize on the line for a rider who could win all three 10-lap races in the premier class.

In Main Event 1, Savatgy was able to snag a holeshot aboard his all-new 2019 KXâ„¢450 with his teammate Tomac in tow. Tomac was able to quickly get by Savatgy and move into the lead by lap three where he would check out from the competition for the remainder of the race. Savatgy shuffled back a few positions and finished the race in fifth place. The second race of the night was almost identical to the first with Tomac taking the holeshot this time and winning by a large margin with Savatgy crossing the line in sixth place. Unfortunately, Bowers' night would end early after he tangled with a downed rider in Main Event 2.

The pressure was on Tomac with the largest payday in motorcycle racing as he lined up for Main Event 3 with $1,000,000 on the line, Savatgy would make it a KX450 holeshot sweep for the night as he nabbed the holeshot once again and began to check out from the field. Tomac suffered from a poor start that left him in seventh place by the end of the first lap. Tomac would spend the next nine laps hunting down the competition and slicing his way to the front. The crowd was standing on their feet and cheering as it came down to the last lap. Tomac closed the gap on his Monster Energy Kawasaki teammate and made the pass in the back section of the track to sweep the night and secure the Monster Million. 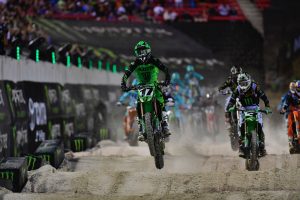 "This is crazy," said Tomac. "To become the first two-time winner of the Monster Energy Cup and winning the "Monster Million" is just insane. My 2019 KX450 was running so well all night, our starts were dialed, the suspension was perfect; it all just came together, and I couldn't be happier right now. It was a great team win tonight. To also have a fan defy the odds and win a million bucks because I won is just insane!"

A new wrinkle was added to this year's Monster Energy Cup, one lucky fan, Jesse Hebert from Greenbelt, Maryland also won a $1 Million Grand Prize after successfully predicting Tomac would race his way to the "Monster Million."

"Man, I am so pumped," said Savatgy. "I am so thankful to be a part of this Monster Energy Kawasaki team. It truly feels like family over here and I am excited for what 2019 has to offer! My KX450 was a rocketship all night long and helped put me on the podium." 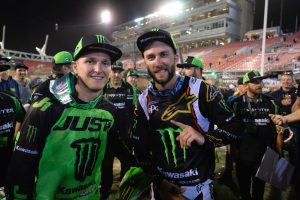