Just one short week after representing the U.S. in the FIM Motocross of Nations at RedBud MX, Monster Energy/Yamaha Factory Racing Team's Justin Barcia changes gears this week as he prepares to go to battle on Saturday for the 2018 Monster Energy Cup (MEC) in Las Vegas. 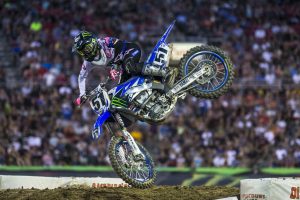 Held at Sam Boyd Stadium, the one-off MEC format consists of three Main Events, combining 450cc and 250cc racers on a uniquely-designed Supercross track. Barcia, who comes off the final round of the AMA Pro Motocross Championship with a 1-1 sweep behind him, is feeling determined and ready to go after the "Monster Million" prize of sweeping all three Main Events for the night.

"This is my first Monster Energy Cup with the Yamaha Factory Racing Team so I'm really looking forward to doing a new style of race. It'll be three ten-lap Main Events, which I think obviously we have a really good bike for that setup. It's super-fast off the start, and starts are really important.

It's been a busy "off-season" with the Motocross of Nations and things like that so we haven't had a whole lot of time to get ready but I'm really looking forward to it. I think it will be a fun race. It's definitely a unique track, so I'm very interested to see what they throw in there."

Stop by the Monster Energy/Yamaha Factory Racing team transporter on Saturday during the Pit Party from 11 a.m. - 5:30 p.m. for a 'podium photo' opportunity with Justin Barcia's bike! Justin will be at the team transporter from 1:30 - 2:30 p.m. to meet fans and sign autographs

(the time is local and subject to change due to scheduling).

IF YOU CAN'T MAKE IT TO LAS VEGAS, TUNE INTO FS2

Saturday's coverage of the Monster Energy Cup from Las Vegas will be broadcast on FOX SPORTS 2 beginning at 6:30 p.m. PST. So, if you can't be there on Saturday, be sure to watch Justin and the other Yamaha bLU cRU riders on FS2.