Chaparral Motorsports, Precision Concepts, Kawasaki Team Green rolled into round nine of the WORCS series in Mesquite, Nevada for Saturday's pro and pro 2 event. Mild temperatures facilitated beautiful conditions for the ninety-minute pro race. That being said, the Mesquite race course offers some of the deepest sand of any circuit besides Sand Hollow. And because of the tighter course layout, it's usually one of the more physically demanding stops on the calendar as deep, sharp sand whoops cover much of the track. 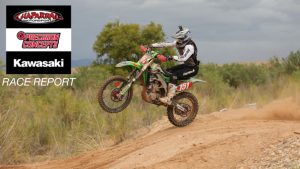 In the pro race, team manager Robby Bell made a guest appearance, filling in for the absent Blayne Thompson. After getting off to a slow start, Robby finished fifth. Justin Seeds recovered from a couple hard spills early-on to land sixth pro. Lastly, Pro 2 rider Clay Hengeveld led laps in his respective class before taking a very close second-place finish. 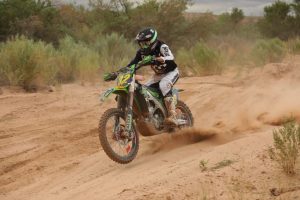 Heading into the weekend, the team had made the decision to have Blayne sit out the Mesquite WORCS round in order to focus on the BIG 6 Grand Prix the following day. Wanting two pro bikes on the track, Robby made the call to suit up. It was also a great opportunity to shake down the 2019 KX450 in a race situation. Not wanting to get too involved off the start, Bell rolled off the line and let everyone go. Once the riders made it to the sand, Robby started to pick up the pace and make up a few positions. Somewhat surprisingly to himself, Robby had moved up to fifth place heading into the last lap. He had a couple riders nipping at his heels, but was able to withstand the pressure and earn a top-five finish.

"I can't say I expected that. Mesquite is usually pretty brutal, so I was figuring I'd hit the wall at some point. Then the crew held out the P-5 pit board on the last lap and I just had to hold on to it! I didn't want to get into it off the start. I have a lot invested in the surgeries coming up with my dental implants and didn't want to take a bunch of roost on the hard-pack moto. After the riders got a little spread out, I started to remember what it felt like to race and really enjoyed it out there! As fun as it was, I'm definitely ok not doing that [racing pro] too often." 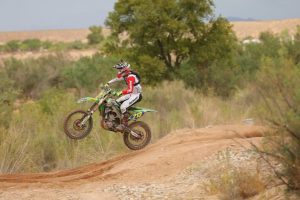 Justin typically excels in the sand and felt optimistic after the early practice sessions. Unfortunately, any momentum he had was squashed by a pretty violent crash on the first lap. Seeds was running sixth when the back end stepped out slightly. Then, it caught and swapped back, instantly throwing Justin over the bars. He was quick to gather himself and remount, but had dropped to tenth after the fall. As he pushed to get back towards the front, Seeds had another fall, which set him back yet again. From there, the number 213 was able to find a solid pace and really came into his own over the closing laps. Justin made the pass into sixth on the final lap. He, then, nearly made the pass to get into the top-five, just running out of time as the checkers came out.

"Coming into the weekend I felt pretty confident. I do like the sand a lot so I felt like it was going to be a strong race for me. Off the start, I was running sixth, basically right off the lead pack. Then, unfortunately, I had a little mishap in the sand section. I kind of rag-dolled myself and tweaked the front-end of the bike pretty good. I was able to get up from that...then splattered [myself] on the ground again. Once again, I was able to recover from that and charged into sixth. Almost passed into fifth there at the finish. But all-in-all it was good. I was pretty sore, but it could have been a lot worse." 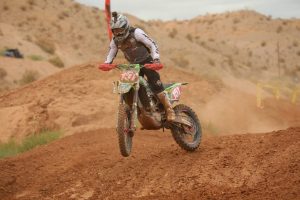 Clay seemed well and truly over the recent foot injury, as he earned an impressive second-place finish in pro 2. Hengeveld didn't get off to the most ideal start, slotting in around eighth early. However, the Kawasaki rider was able to make a few quick passes to get inside the top-five and then set his sights on the podium. A spectacular crash by KTM-mounted Austin Serpa moved Clay into third. Then "lil Henge" stalked another KTM rider in Mitch Anderson. After a couple laps, Hengeveld was able to make the move into second. Just after the hallway mark, Clay made the pass for the lead as the Husqvarna of Tallon LaFountaine pitted for fuel. Unfortunately for Clay, Tallon was able to stay just close enough to pass back by when Henge pitted the following lap. Clay dug deep and slowly closed the gap to the leader, but just ran out of time, coming up a few seconds short at the checkers.

"My goal coming into Mesquite was to get on the podium. I've been working really hard to accomplish that, especially healing up from [this] injury. I wanted to have a clean race and give it my all. I was able to do that and lead for a couple laps, but we ended up second. I'm actually pretty stoked on that."