It was quite an eventful weekend of motocross action across the glove as several champions were crowned and big names won big races. 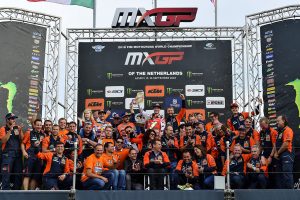 Starting over in the Netherlands, Red Bull KTM Factory Rider Jeff Herlings won the 2018 MXGP series in the best way possible, by going 1-1 on his home soil. The Dutch rider came into the Assen, Netherlands MXGP event with a sizable points lead over reigning champion, Italian rider and his Rd Bull KTM teammate Antonia Cairoli. In fact Herlings only needed to finish 16th or better in the first race in order to seal his fate for the season. As he's done most of the season, Herlings rode a great race and after Cairoli slipped past a brief battle ensued until Herlings took the lead and began to increase his distance over Cairoli until the checkered flag.

Herlings celebrated his championship title with his family, friends, and team and then lined up for the second race with the prestigious number 1 plate across his handlebars. Race two didn't go well as Herlings had hoped as a small crash dropped him to sixth place early on. With Cairoli in the lead, he battled back to second and then waited for the right time to make a move on the Italian rider to take the lead. Herlings continued his championship season as he'd done 15 times previously, by taking the overall win. Not only has he won 16 races so far this season but he has gone 1-1 a remarkable 14 times. 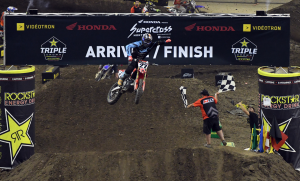 Meanwhile in Canada, just a few weeks after posting an image to Instagram with his number strewn across a SmarTop/MotoConcepts/Honda, Malcolm Stewart is already giving the team good reason to consider extending his temporary (it runs through December) contract into 2019. Stewart rolled up to Montreal for the opening round of the Canadian Supercross Championship and put on a dominant show aboard the Honda 450R. Stewart swept the competition in all three races and ended the day with a perfect score of 30 points for the event.

While the results from the event are really impressive, what even more impressive is that Stewart came into the event having not raced since the final round of the 2018 Supercross season. After securing a fill in spot on the Autotrader/Yoshimura Suzuki team and finishing 11th overall in the 450 SX series, Stewart didn't have a ride for the Pro Motocross season, so he regrettably sat it out. It'll be extremely interesting to see what happens if Stewart continues to put in performances leading up to the 2019 SX season like he did this past weekend. 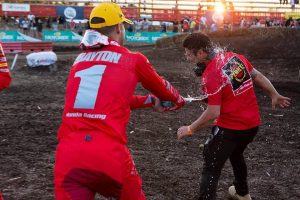 Moving Down under, reigning Australian Supercross Champion Justin Brayton, wowed the Australian crowd yet again by taking the overall win in the series opener at Jimboomba in Queensland. The American rider won the race with a margin of more than 5 seconds over his teammate and second place finisher Brett Metcalfe. Aside from winning the AUS Championship last year, Brayton has had a pretty good 2018 SX season where he finished 5th overall and marked history at the Daytona race by becoming the oldest rider ever to win a 450SX main event. 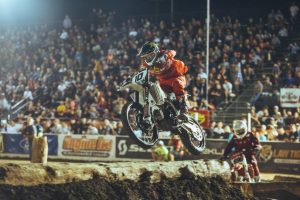 Here in southern California, Colton Haaker showed up to the Orange County Fairgrounds in Costa Mesa and put in some hard work to take the overall win inthe second round of the EnduroCross series. After taking second place behind reigning champion Cody Webb at the season opener in Prescott Valley Arizona, Haaker from Perris, California, settled in right at home in his backyard and dominated with a heat win, bracket win against Webb and then won the main against a crowded field. He now leads the series with a four point gap over Cody Webb.