What's the best thing about the end of summer? Well if you're a sand enthusiast or desert rat the end of summer means it's finally cooling down enough to start preparing the side-by-side for some duning and hooning. Southern California is home to the largest sand dune mass and one of the largest OHV recreation areas for sand dunes in the country, the Imperial Sand Dunes aka Glamis. However, due to temps well over 100 degrees throughout summer, it's just too unbearable for most people to even think about venturing out to the dunes-we are not like most people! 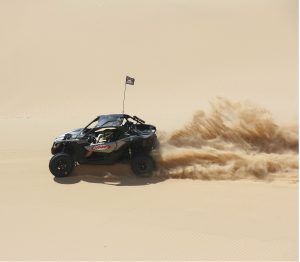 With our reputation as one of the largest powersports tire retailers in the country, we like to continually research and learn about the products we sell so that we can help our customers make informed purchases. So naturally with sand season right around the corner we decided to head out to Glamis, in the middle of August, when temperatures were going to be upwards of 105 degrees, to put some of the more popular UTV sand tires we sell to the test. 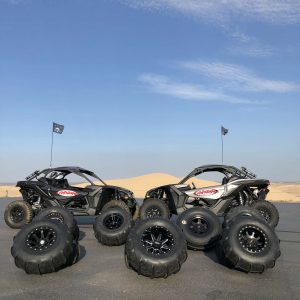 The goal of this sand tire test was to pit six different paddles tires against each other to see which performed best out in the dunes. The tires we chose were: AMS Sand King, STI Sand Drifter, System 3 DS340, Quadboss QBT346, EFX SandSlinger, and GMZ Sand Stripper XL. To keep things fun, fair, and interesting we brought along two of the exact same side-by-sides, 2018 Can-Am Maverick X3 xrs', so that we could run the tires in head to head battles. Also, knowing that not everyone likes to run sand tires and some duners will just air down their stock or aftermarket offroad tires, we included Maxis Big Horn 2.0 tires (stock on the Cam-Am Maverick X3 xrs) and a set of Tensor Regulators (one of the most popular Offroad tires we sell) in the tests.

On August 21st once we had everything figured out and loaded into trailers we hit the road and headed to Glamis-well actually to Brawley where we spent the night before testing. Then bright-it was actually still dark- and early on the 23rd with the temperature projected to hit 108 in Glamis we setup a makeshift pit lane at Hugh T. Osborne Lookout Park.

Next, we ventured out into the sandy abyss to find a couple places to set up some testing courses. Most people like to push the limits of their sanity and side by sides by climbing up the steepest dunes they can find. While that would have been a fun and exciting test, we had a lot of tire changing and back and forth from the pits to do so we decided to keep it close and established a 300-foot hill climb up Competition Hill. Not the steepest dune in Glamis but it's got a decent incline and would allow us to see how fast (or slow) each tire could crest the mound. Then we marked out a 1/8th-mile drag strip across the base of Comp Hill so we could see which tires hooked up best, dug the vehicle into the hole shot quickest and got the car skimming across the top of the flat at full speed.

It was a long day, especially since two cars got stuck within the first 20 minutes on the sand and we proceeded to get stuck a couple more times throughout the day. The temperature hit all of the 108 degrees that was expected, but we managed to test all the tires and made it back to San Bernardino before sun down. You can read about the the Hill Climb results here. Check out the Drag results here. results Or just sit back and enjoy this teaser video.