: Indian factory rider Jared Mees has carved his name in the annals of Flat Track legends by winning the 2018 American Flat Track (AFT) Championship, his fifth title in the Grand National class, with three rounds still to come. 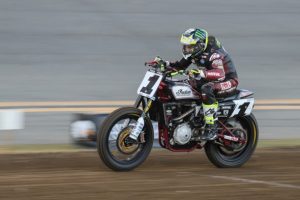 His performance during the 2018 season was an astonishing show of dominance-he won ten times, finished second three times, and never finished lower than fourth. This season extended his win record to 40 Grand National victories, fourth on the all-time win list.

Mees locked up the title at the 100th running of the Springfield Mile, finishing second by a scant 0.013 seconds to his teammate Brian Smith, and elevating his point lead to an untouchable 325 points.

As the official tire of the ATF series, Dunlop is proud to supply the field with American made DT3 flat-track tires, and we extend a well-deserved congratulations to Mees on an amazing season and fifth AFT championship.