It was an incredible day for the soon-to-be Monster Energy/Yamaha Factory Racing teammates of Justin Barcia and Aaron Plessinger, who rode to impressive 1-1 sweeps in their respective divisions on Saturday for the final round of the 2018 AMA Pro Motocross Championship in Crawfordsville, Indiana. 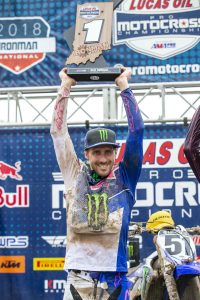 Despite being faced with the most adverse weather and track conditions of the season, Barcia out-performed the competition to break through for his first 450MX moto win and overall victory of 2018. For Plessinger, Round 12 marked the fifth 1-1 sweep of his championship-winning season as he concluded a successful 250MX career with the Monster Energy/Yamalube/Star/Yamaha Racing Team on Saturday. Next, Plessinger is slated to race the Motocross of Nations on his YZ250F, before joining Barcia and the team in the 450 ranks for 2019 and beyond.

With heavy rainfall plaguing the area on Saturday morning, the decision was made to cancel the second set of timed qualifying due to deteriorating track conditions. Barcia used that as a positive platform to claim the second fastest time in the first session and head into the first moto with a favorable gate pick. As 450MX Moto 1 got underway, the track conditions were less than ideal but Barcia prevailed with a clean start aboard his YZ450F. He quickly made his way into the lead on the opening lap and set the pace early on. Barcia got stuck in the mud on lap three and dropped back to second for a few laps before reclaiming the lead just before the halfway mark. From there, the New York native called upon his seasoned-skills and expert race craft to finish off strong and claim his first moto-win of the season.

Meanwhile, Cooper Webb was involved in a muddy first corner pileup and he was forced to play catch-up from the 30th position on lap one. Despite the sloppy track conditions, Webb clawed his way through the field to ultimately finish with an impressive ninth-place in the first moto.

In Moto 2, both riders got off to a great start but it was Barcia who assumed the early lead and Webb sat close by in third. Barcia settled into a groove that allowed him to lead all 14 laps of the race with a smooth performance in the slick and unfavorable conditions. Webb battled his way to a fourth-place finish, setting himself up for a season-best fifth overall with a combined score of 9-4 on the day.

After 12 rounds of racing - Barcia sealed up the 2018 AMA Pro Motocross season with two moto-wins, one overall victory, 11 moto-podium appearances and 20 top-five moto finishes in the highly competitive 450MX division. Webb, who missed the first five rounds of the series due to injury, garnered 13 top-ten finishes and two top-fives in the last seven rounds.

Following the final motos from Crawfordsville, Indiana, MX Sports Pro Racing awarded teams, riders and industry personnel with top honors from the 2018 season. At the top of the list was Yamaha Motor Corporation, U.S.A. (YMUS) taking home the prestigious "Manufacturer of the Year" award for its success in both the 450MX and 250MX classes. Additionally, the Monster Energy/Yamalube/Star/Yamaha Racing Team was awarded "Team of the Year" for its incredible accomplishments in the 250MX class, including a championship-winning season from Aaron Plessinger with 11 moto wins and six overall victories, five of which were 1-1 sweeps; as well as four moto wins and two overall victories from Dylan Ferrandis; and an amazing "Rookie of the Year" earned performance by Justin Cooper with one moto-win and six podium finishes, where he claimed third overall in his first-full professional season.

"What an awesome day to end the season here at Ironman. Justin Barcia rode outstanding to take both moto-wins and the overall, a season-first in many occasions. Cooper Webb rode solid all day after coming from behind in the first moto, by far his best ride of the year also. It was a rough day, no question about that. Heavy rains all morning cancelled practice and there were multiple changes being made to the bikes with tire selection - which was critical, suspension changes to compensate for the mud, and gearing changes. I was glad to see the team come together in the final race to put all the pieces together and get a moto win and the overall. It was a great day for the Monster Energy/Yamalube/Star/Yamaha Racing also, with Aaron Plessinger winning both motos. That was great to see him end his career in the 250 class with a championship and another moto sweep. It was a great way to end the season and we're looking forward to the Motocross of Nations, the next big event in October."

"It was a wild day! Going into the motos, I was feeling really good and my bike was working good. I led the first moto for a bit and then I went down and ended up having to pull my goggles off. I was in second, trying to dodge the mud because I didn't want to pull in for goggles, so I finally got back into first and just took it home to the finish line, which was awesome. I've been searching for that win all year and I've been saying that's what I wanted and I ended up getting it, so that was great. In the second moto, I got another solid start in second, I made the pass to first pretty quick and I took it home to the finish line. We just wanted a moto win and to get a 1-1 at the final round was awesome, it was more than I could ask for. I felt like if I got a moto win I could get the overall and we did it, so it's an incredible feeling. I'm really proud of everyone on the team, we did a great job and now we get a little break before starting back up for Des Nations and then Monster Energy Cup. I'm looking forward to those two races coming up and I'm just very grateful and excited for everything that's happened this year and I can't wait for the future."

"Ironman was a really good race for me. First moto, I had a first turn crash and was down for a really long time and someone hit my rear wheel and I got a flat tire but I was able to come back to ninth. In Moto 2, I rode really well and was in third for about 20 minutes or so, and ended up falling back to fourth. It was my best race yet with fifth overall, so I'm very happy heading into next year!"