: Aaron Plessinger could have taken the easy way to his first 250 National Motocross title at Budds Creek. He carried a substantial points lead heading into the penultimate round of the championship, and could have easily cruised to the title. 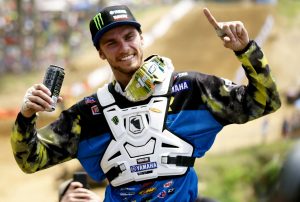 Instead, with heat hovering in the triple digits, Plessinger, a Team Dunlop Elite alum, nailed the holeshot in the first moto and simply split. He led every lap of the race, winning by almost seven seconds over RJ Hampshire, and locking up his first 250 Motocross Championship.

The 2018 250 Motocross championship caps off Plessinger's best ever season, as he captured the 250 West Supercross title earlier in the year. In the outdoor series, Plessinger had a dominant season, taking nine moto wins and the title with one round to go by a whopping 84 points.