The Monster Energy/Yamaha Factory Racing Team battled through adverse conditions at the Unadilla MX National on Saturday to capture solid finishes from Round 10 of the 2018 AMA Pro Motocross Championship in New Berlin, New York. Justin Barcia finished a hard-fought fourth overall to reclaim third in the 450MX Championship, while teammate Cooper Webb rallied back from a tough first moto to claim a season-best fourth-place finish in Moto 2 and ninth overall for the day. 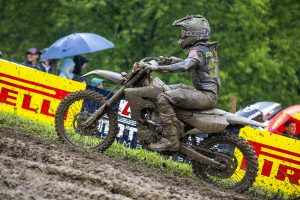 It was a great showing for the Monster Energy/Yamalube/Star/Yamaha Racing Team as Dylan Ferrandis swept both 250MX motos amidst the muddy chaos, and Aaron Plessinger scored a pair of second-place finishes to further extend his championship lead to 78 points with two rounds remaining.

The day started off great for Monster Energy/Yamaha Factory Racing teammates Barcia and Webb, who qualified impressively in the 1-2 positions, respectively. However, heavy rainfall came down just after the final practice session, causing track conditions to change immensely for the day's racing. As the gate dropped for Moto 1, so did the rain and it became a race of survival with track conditions sloppy at best. Barcia had a decent jump off the gate but the slick conditions caused another rider to slide into him and take him down in the first corner. Covered in mud, Barcia quickly re-mounted and began a valiant charge from the back of the pack. Despite a few more crashes along the way, Barcia climbed all the way up to finish eighth in the first moto.

Meanwhile, Webb didn't get the best start and he rounded the opening lap just outside the top ten. He climbed into seventh by lap three and after stopping in the mechanic's area to change out his goggles, Webb continued to battle for the eighth spot for most of the race. With two laps to go, Webb lost his vision when he encountered a rock to the eye from another rider's roost. He pulled over to clean his eyes and eventually soldiered on to salvage 16th place in Moto 1.

Although the rain subsided after the first set of motos, the track remained challenging and unpredictable for Moto 2. Barcia got off to a top-five start and charged early on but he ended up sliding out on the face of a jump and dropped back to sixth on the opening lap. By lap two, he had caught up to his teammate Webb, who got off to a great start in fourth-place. Barcia trailed Webb for a few laps before making a pass at the halfway mark and from there, the Yamaha bLU cRU duo ensued in a back-and-forth battle for third. After swapping positions in an exciting battle, it was Barcia who locked in the final podium spot for Moto 2, while Webb finished strong only 15 seconds back for a season-best fourth place finish.

"Both riders put in a strong ride despite the treacherous conditions at Unadilla. It was definitely a bummer for the first moto, but the team turned the bikes around in a short period of time between motos, made some adjustments for the muddy conditions and things turned around for the second moto. It was a tough day for the team but everything worked out well and we're ready to finish out strong for the last two rounds."

"The day started out great, I qualified fastest overall, which was awesome, and I showed that I had my bike working good and we had a good setup going into the first moto. I missed the overall podium by a little bit, which was disappointing, but all-in-all it was a solid day. I just wish I would have been able to get some cleaner starts and run up front with the front guys. That being said, we're healthy and ready to move on to the last two rounds."

"Unadilla was an up and down day for me. It started off really well because it was dry and I was able to qualify second, which I was really happy with especially after a weekend off. It was definitely going in a good direction and then the skies opened up and it started raining. The first moto I didn't get a very good start and pretty much stayed around eighth-place for most of the race. With two laps to go, a lapper roosted me and I didn't have any goggles on and a rock went straight to my eye. I fell over on the side of the track and was trying to clean it out so I could get my vision back. I got back on the bike and got 16th. The second moto was much better. I got a better start and ran fourth for a long time. I had a really good battle with my teammate Barcia and I was third at one point, but ended up fourth. That was my best result of the season so far and I was very happy with a top-five, so we'll keep building for these last couple."