In front of an audience of over 1,000 attendees of the Sturgis Motorcycle Museum Hall of Fame Breakfast, a passionate Ryan McFarland, founder and chief enthusiast officer of Strider Bikes, presented the 2018 Strider Inspiration Award to high school educator, Amy Speidel. Serving as the title sponsor of the breakfast, Strider Bikes awarded its second annual Strider Inspiration Award to Speidel, a special education teacher at Rapid City Central High School. 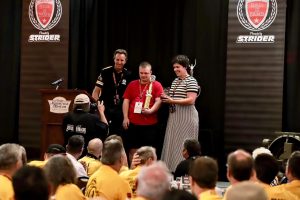 Strider recognized Speidel for incorporating Strider 20 Sport Balance Bikes into her high school classroom, utilizing them for the physical and cognitive development of her students. While their initial use was intended to focus on physical development, the bikes became a transformative tool for the students.

"Kids who I never thought would be on a bike at all, are now doing it every day," noted Speidel. "We use them for recreation, social skills, community skills, physical therapy, adaptive PE, language development and behavior interventions. They're incredible."

On hand for the presentation was a student of Speidel's, Grady Leonard, who progressed from an oversized tricycle to independently pedaling on two wheels after learning on a Strider. He plans to learn to ride a motorcycle by the end of the year, a goal that received loud cheers and applause from the motorcycle enthused audience.

Inspired by Speidel's thought to include Striders inside the classroom to enhance students' lives, McFarland sought to grow this model throughout the country, beginning with kindergarten classrooms.

"Our vision is to ensure all children, regardless of their race, gender, physical ability, socioeconomic background or other factors, can ride a bike before entering first grade," stated McFarland. "To achieve this, we have created the 501(c)(3), Strider Education Foundation, designed to teach kindergartners to ride using the Kindergarten PE Program.

Launched in 2017, the Strider Education Foundation is a registered nonprofit focused on transforming lives with riding. One program of the Foundation is the Kindergarten PE Program, teaching kindergartners to ride safely and confidently as part of their PE classes. Schools across the United States are being adopted by donors to bring this program to schools at no cost.

The Hall of Fame Breakfast was one of several rally events featuring Strider. On Sunday, custom Strider Bikes were featured at the legendary Sturgis Buffalo Chip during the Flying Piston Benefit Breakfast followed by an appearance at the Motorcycles as Art exhibit. Seven Strider Bikes were customized by notable bike builders including Jody Perewitz of Cycle Fab, Rick Fairless of Strokers Dallas and Paul Yaffe of Bagger Nation. The collection was also featured at the Legends Ride, Biker Belle's event and the Hall of Fame Breakfast.

On Tuesday evening, young rally-goers took to the track as 3- and 4-year-olds raced their Strider 12 Bikes at the American Flat Track Races held at the Black Hills Speedway in Rapid City. Approximately 30 racers took to the dirt track racing in two heats. Three toddler two-wheeling phenoms took home trophies as large as they were while the other riders received medals for their racing efforts. Along with racing their own bikes, all of the participants were treated to a free admission along with their family to take in the Flat Track Races. 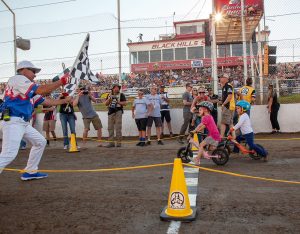 Strider creates and inspires future generations of riders by giving children as young as six months old the best first-bike experience. Strider Bikes revolutionized the bike's design to develop a child's balance first and pairs each balance bike with a proven learn-to-ride process. Children across the globe are starting on a Strider Bike and becoming two-wheeling virtuosos - before they're out of diapers.

Founded in 2007, in Rapid City, South Dakota, Strider has sold more than 2 million bikes and is distributed in more than 75 countries. Visit www.StriderBikes.com, Facebook or Instagram.

The Strider Education Foundation is a US-based, 501(c)(3) organization founded in 2017. The Foundation supports nonprofit organizations, schools and government entities that share in its values of changing the world by inspiring and creating bike riders. The Foundation, supported through private donations and Strider Sports International, provides two-in-one conversion bikes, educational curriculum, and monetary resources to organizations and public institutions committed to teaching the transformative lifetime skill of riding a bike in a structured setting.