The Monster Energy/Yamaha Factory Racing Team headed to Millville, Minnesota on Saturday for Round 8 of the 2018 AMA Pro Motocross Championship at Spring Creek MX Park. Justin Barcia battled through tough starts to earn a top-five overall, while his teammate, Cooper Webb, scored seventh overall for the day. 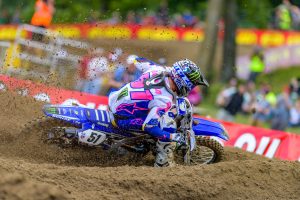 In the 250MX class, Monster Energy/Yamalube/Star/Yamaha Racing's Aaron Plessinger had another standout performance as he claimed his second-straight 1-1 sweep on Saturday. With four rounds remaining, Plessinger holds a 49-point lead in the championship standings.

In Moto 1, Barcia had his work cut out for him after a top-ten start. He immediately began fighting his way through the pack to bring himself inside the top-five by lap three. He maintained the position for the rest of the moto, finishing fifth. Webb started off just behind Barcia in tenth but wasn't able to put on a charge as early as his teammate. Webb eventually climbed into eighth by the halfway point and he made his way up to seventh by the end of Moto 1.

In Moto 2, Barcia struggled off the start once again to round the opening lap in tenth place. He quickly climbed his way through the pack to fight for a top-five position early on. Barcia got stronger as the race wore on and he made his move into fifth with four laps to go, ultimately finishing the day with a 5-5 moto score. Webb got shuffled back off the start and rounded the opening lap in 12th place. He made moves early on to climb inside the top-ten and he maintained a solid pace to ultimately finish ninth in the moto and seventh overall for the day.

"We had a bit of a struggle today. Justin Barcia finished fifth overall with a 5-5 moto score and poor starts definitely didn't help. He rode solid throughout the day but just never found comfort and speed on the track. The track was brutal, a little bit more hard-packed and the team made some adjustments throughout the day and between motos but still, his starts were poor and that basically affected the day. Cooper Webb rode to 7-9 finishes for seventh overall. Some improvements but still, there is work to be done. Justin will be in California this week to do a little bit of testing before we head to Washougal and hopefully we can get back on track and fight for that podium finish and overall win."

"We were working on my set-up all day, I was kind of struggling down the hills a little bit. As the day went on, I built my speed up but bad starts kind of held me back. I got a bad start and worked my way up to fifth in both motos and that's pretty much all I could get to. It was definitely a frustrating day for me, just because I expected to be on the podium and battling for wins. All-in-all, it was challenging but we move on and we're healthy, so that's a plus. I'm heading out to California now to do some testing and get ready for Washougal. I definitely want to get back on that podium, I missed it a lot this weekend."