While the picture and video would have you think otherwise, actor George Clooney was miraculously able to survive a head on collision with a Mercedes station wagon while riding a scooter without any reported major injuries. The accident occurred on July 10th, on the Italian island of Sardinia where Clooney is currently filming. 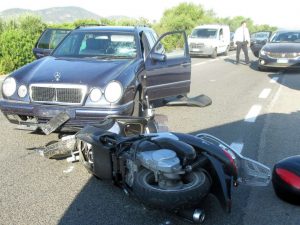 Video from a security camera along the road where the accident occurred shows the Mercedes cross over the center line into the lane of oncoming traffic as if it were making a left hand turn. A person riding a scooter just a head of Clooney was able to narrowly miss the car and then a split second later Clooney is seen colliding with the front of the vehicle.

Watching the video it really is incredible to believe that Clooney wasn't seriously injured-especially with the speed at which the accident occurred. Apparently he was immediately taken to the local hospital and released a little while later. He was most recently seen just yesterday gingerly walking onto a private plane and using a handrail to help him up the steps. Best wishes on a quick and full recovery George.