Monster Energy/Yamaha Factory Racing's Justin Barcia continued his 450MX podium streak on Saturday with a solid third overall for the unusually rough and challenging Southwick National. His teammate, Cooper Webb, lined up at Round 6 of the 2018 AMA Pro Motocross Championship for his first race back from injury, where he battled his way to a top-ten overall finish in some of the toughest conditions of the season. 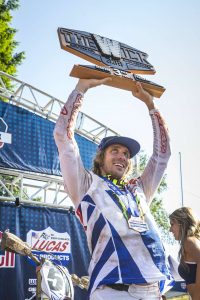 In the 250MX class, Monster Energy/Yamalube/Star/Yamaha Racing's Dylan Ferrandis earned his first-career 250MX overall victory with 4-1 moto finishes. Ferrandis now enjoys a two-race podium streak in only his third race back from injury.

In Moto 1, Barcia got pinched off early on the start but he powered his way into second early on the opening lap. He took over the lead on lap five and held off a hard-charging trio of riders behind him in an intense battle for the lead. Barcia eventually dropped to third, where he remained for the rest of the race to ultimately secure a top-three finish in Moto 1. Meanwhile, Webb found himself just outside the top ten off the start. He battled his way up to eighth and finished strong in his first moto back from injury.

In Moto 2, Barcia started just outside the top five but he put himself into fifth on the opening lap. He climbed up to third by lap six and put on a solid charge for the remainder of the 30-minute plus two-lap race, finishing third in the race and third overall for the day. Webb got off to a great start but he ran into some carnage in the first few turns and got shuffled back a few positions. He fought his way up to ninth by lap six and he stayed strong through the final laps to ultimately finish ninth. With a pair of consistent 8-9 moto finishes, Webb secured eighth overall in his first Pro Motocross event of the season.

"Justin Barcia continues to work to step up his game and he put in two solid motos on Saturday. Southwick is a tough place. The team worked between motos to make some fork changes and Justin came out swinging in the second moto to put in a solid ride and come away with his second-straight overall podium. He's looking forward to RedBud next weekend and looking to take another step to hopefully get a moto win. It was great to have Cooper Webb back under the tent this weekend. He put in two solid motos, finishing inside the top ten, and he'll work on that now that he has a race under his belt and continue on to RedBud."

"It was great to be on the podium again. The track was difficult, it wasn't how I expected it to be. I always hope it's going to be kind of whooped-out and really sandy but it was actually pretty high-speed, choppy and slick under the sand. I kind of struggled all day and wasn't able to push to the next limit to catch the first and second-place guys. It was a bit frustrating for me because I felt like I should have been closer to the front but I just didn't have that edge at Southwick this year. It was definitely the hardest race of the year - it was really hot and then that high speed chop for 35 minutes is definitely challenging, but all-in-all, for a bad day to be on the podium is definitely a positive."

"Southwick was a really tough one to come back to, that's for sure. It was a really hot day and probably the roughest I've ever raced Southwick, but it was really good to be back at the races with the fans and the team. I'm still building and still trying to get my fitness up and I think that's where I'm at right now. I was happy with that, I went 8-9 for eighth overall and was able to get a top-ten. It's not where I want to be but at the same time, I haven't raced for a long time and my preparation hasn't been the best yet since I've been injured. We'll get better each weekend and I can't wait for RedBud!"