The Monster Energy/Yamaha Factory Racing Team heads to Southwick, Massachusetts this weekend for Round 6 of the 2018 AMA Pro Motocross Championship. With its one-of-a-kind sandy terrain, The Wick 338 is a favorite stop among Yamaha bLU cRU riders as they prepare to do battle this Saturday, June 30. 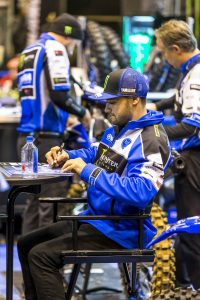 Justin Barcia, who earned his first 250MX win at Southwick in 2009, undoubtedly favors the sand and electric atmosphere that New England has to offer. The New York native holds plenty of additional momentum as he comes into the weekend with a season-best ride in Tennessee, where he led laps and battled for the overall win in the 450MX class.

Barcia's teammate, Cooper Webb, is set to make his 2018 Pro Motocross debut this weekend after missing the first five rounds due to an injury sustained at the Minneapolis Supercross. Webb has been putting in the hard work - both on and off the bike - to rehabilitate and strengthen his leg and the North Carolina native has the goal to ease his way back into racing with a solid finish this Saturday.

"After coming off a good race at Muddy Creek, the goal for me is to keep moving up. Of course, I want to be on the podium every week but the next step is obviously getting a moto win and an overall. Going into Southwick, I've always enjoyed racing there. I like the sand a lot and I grew up racing there a bit so it's got some good memories. It's a really fun place to race and it's just a good atmosphere with a lot of fans because it's up north and it's where I grew up. I think the Yamaha power on that track is going to be good with the sand and everything. We've been getting our setup better and better every weekend and the bike is definitely moving forward and making progress. My fitness is great and I'm really comfortable, so I'm ready to go there, have fun and get that first win."

"I'm very excited to be back racing again after my injury. It's been a long time and I've been through a lot of rehab, surgeries and a lot of hard work, so I'm excited to be lining up again this weekend, especially at Southwick. It's a race I really enjoy and I've had a lot of great success there - I got an overall back in 2016 and last year I got a moto podium and fourth overall, so I seem to really gel with that place. I don't think I'm back to 100 percent yet, but I just want to be back racing and getting better each weekend. I don't know where I'll be, but it will be exciting to be back there with the fans and the team. I can't wait to see everybody there!"

Stop by the Monster Energy/Yamaha Factory Racing team transporter on Saturday from 11:30 a.m. - 12:15 p.m. (time subject to change due to scheduling). Justin and Cooper will be there to meet fans and sign autographs.

IF YOU CAN'T MAKE IT TO SOUTHWICK, TUNE INTO MAVTV AND NBCSN