Monster Energy/Yamaha Factory Racing's Justin Barcia earned his best finish of the season on Saturday for Round 5 of the 2018 AMA Pro Motocross Championship in Blountville, Tennessee. Riding to a consistent pair of 2-2 moto finishes, Barcia emerged with second overall in a close battle that came down to the wire for the overall 450MX victory at Muddy Creek. 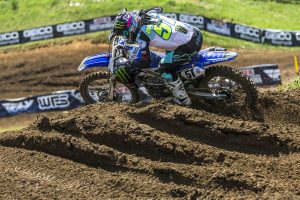 In the 250MX class, Monster Energy/Yamalube/Star/Yamaha Racing's Dylan Ferrandis made the best of a challenging start to the day as he fought back from an 11th place finish in Moto 1 to capture the Moto 2 win and take home second overall for the day.

After qualifying first in session one and third overall for the day, Barcia shot off the line in 450MX Moto 1 to capture a top-five start. He immediately went to work on the opening lap, charging his way up to second by lap six. From there, Barcia maintained a strong pace to claim his best moto finish of the season in second. Meanwhile, his teammate, Alex Ray, got off to a good start but he collided with another rider early in the moto and bent a rear disc, forcing him to ride the entire race with no rear brake. As a result, Ray finished 18th in Moto 1.

In Moto 2, Barcia powered his YZ450F off the line to just narrowly miss the holeshot, but he quickly charged into the lead before the end of lap one. Barcia led the first three laps in an intense battle before getting passed on lap four. He continued to fight for the remainder of the 30-minute plus two-lap race, where he finished only 3.5 seconds back for the runner-up position. With a pair of 2-2 finishes, Barcia secured his best overall finish of the season with second.

Determined to fight for a top-ten finish in front of his hometown crowd, Alex Ray battled from a mid-pack start to bring himself just outside the top-ten. The Tennessee native put forth a great effort to finish strong with 13th in Moto 2 and 16th overall for the day.

"The team had a great day at Muddy Creek. Justin Barcia took another step in his quest to get an overall win. The team has really been working hard Monday through Friday tweaking his suspension setup. They made a couple of fork changes and a rear shock change this week and it really seemed to show. He's riding well and going in the right direction. We're really looking forward to next week at Southwick. He grew up in the sand, he rides in Florida in the sand and it's been a good event for him. Alex Ray struggled throughout the day. He battled through the first moto without a rear brake and came back in the second moto to finish 13th. Tennessee was Alex's last fill-in ride and we're hoping to get Cooper Webb back on the YZ450F at Southwick this coming weekend."

"I was fairly happy with Moto 1 and I think Moto 2 was a little better - leading laps is always a good thing. I felt really comfortable on the bike, we're making great progress and second overall is a step in the right direction to taking a win, that's obviously the goal. I had a lot of fun at Muddy Creek, the track was very difficult. It's really challenging, it's slick and choppy, tight and one-lined a little bit, so you have to be kind of crafty. I'll take the second and move on to one of my favorite tracks of the year at Southwick."

"It wasn't the weekend we had hoped for, coming up short of a top-ten overall. In the first moto, I lost my rear brake but the second moto was better with a 13th. I just want to thank the team for this great experience - I've learned so much. It's a dream come true."