It was a solid day for Justin Barcia and the Monster Energy/Yamaha Factory Racing Team as they rode to their second podium finish of the season on Saturday with third overall at Round 4 of the 2018 AMA Pro Motocross Championship in Mt. Morris, Pennsylvania. Barcia's teammate, Alex Ray, earned a season-best 12th overall with a pair of solid finishes at the High Point National. 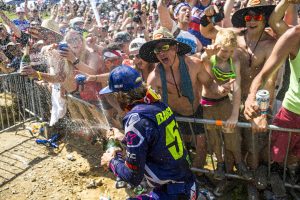 Additionally, the Monster Energy/Yamalube/Star/Yamaha Racing Team had a great day aboard the YZ250F, from Aaron Plessinger's flawless 1-1 sweep in the 250MX class, to Justin Cooper grabbing a pair of holeshots and third overall, and Dylan Ferrandis finishing just off the overall podium in fourth for his first race back this season from injury.

Barcia powered his YZ450F off the line in Moto 1 to put himself into second on the opening lap. He battled back-and-forth for second early on, before settling into an uncontested third for the remainder of the race. His teammate, Alex Ray, got shuffled back to 17th on lap one but he fought his way up to a top-ten position, where he ultimately earned his best finish of the season with 11th.

In Moto 2, Barcia had a good jump off the start but he bumped into another rider in the second corner and bent his front brake rotor early on, forcing him to race the entire moto without a front brake. Despite the early challenge, Barcia went on to finish fifth in the moto and third overall for the day. Meanwhile, Ray grabbed a top-15 position off the start and he maintained the same positioning throughout the race to ultimately finish 15th in the second moto and a career-best 12th overall for the day.

"Mt. Morris was a good day for the boys in blue. Justin Barcia rode to a solid third overall on the day, which was good points toward the championship chase. Fill-in rider Alex Ray rode solid all day and he's looking forward to taking the best finish of this career into his home state of Tennessee next weekend."

"All-in-all, it was a solid weekend. The first moto I struggled a little bit with arm pump fighting the rough track conditions. I felt like I could have had my bike a little bit better for the first moto so in between motos we made some good changes and I felt good about them heading into Moto 2. Unfortunately, going into the second corner I tagged somebody and bent my front brake rotor so I had no front brake the whole race, which was super challenging. That's a really difficult track to ride without a front brake, with the deep ruts and all. To be back on the podium was definitely the goal. I definitely was a little frustrated but it is what it is. We'll take a podium on a bad day any day. The team worked really hard to get the bike ready for the second moto and I felt like it was a really good direction that we'll take into Muddy Creek next weekend."

"Overall, it was a solid day. My goal for High Point was to put two consistent motos together. I know I can be better, I just need to eliminate the mistakes heading into my hometown race at Muddy Creek."