Adventuring out on your dirt bike and exploring new territory is a blast. What's not so fun is not being able to find that awesome single track you hit on your last ride, or worse, getting so carried away riding that you get discombobulated and can't find your way home. GPS units have become a must have accessory for many riders who like to wander into the wilderness and beyond. Trail Tech has been building GPS and on-board computer systems for quite some time offering devices that are compatible with ATVs, UTVs, and dirt bikes/dual sports. 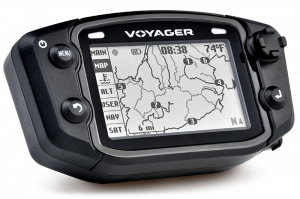 Trail Tech has become a top player in the game with its Vapor and Endurance units. But it's the Voyager GPS device that has really been the go to for many dual sport, ADV, and dirt bike riders who do more than ride MX tracks. Offering vehicle data display, route logging, as well as compass and elevation displays the computer is very handy. But as most thing in life, people wanted more. 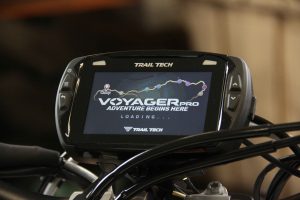 Fans of Trail Tech's computers have been chomping at the bit for the release of the new color display Trail Tech Voyager Pro, and while it's been a long time coming, it's finally out. Much more than just a beautifully lit, 4-inch, full color mapping display, the brand new Trail Tech Voyager Pro has been packed with features such as Buddy Tracking, Bluetooth connectivity, trail mapping and tracking, a media screen with phone dialing and text message display plus a whole lot more. 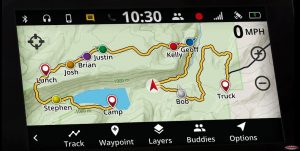 In the video below Kyle gives you an overview of the new Trail Tech Pro and walks you through screen by screen to show the full capabilities of this awesome dirt bike computer. And if this video has you intrigued about getting one for your motorcycle, then be sure to check our YouTube channel for the video we put together showing the very easy step-by-step installation on a KTM 500 ECX-F.