The Monster Energy/Yamaha Factory Racing Team heads to the mountains of Lakewood, Colorado this Saturday, June 2, for Round 3 of the 2018 AMA Pro Motocross Championship. With an elevation of 6,108 feet above sea level, the Thunder Valley National is the highest professional motocross track in the world and Yamaha bLU cRU riders are ready to conquer the challenge. 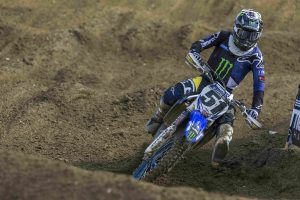 Justin Barcia, who has won this race in the 250MX class and scored a podium finish in the 450MX class before, is fully confident that he and his YZ450F will perform at optimal levels this Saturday in Colorado. Barcia comes into the third round of the championship with a top-three overall standing and he looks to take the Monster Energy/Yamaha Factory Racing Team to another podium finish in the 450MX class. His newly-added teammate, Alex Ray, had his debut ride with the team last round at Glen Helen where he put forth two valiant charges from the back-of-the-pack to earn a respectable finish and his first ever points in Outdoor Motocross. This weekend, Ray looks to build upon last week's performance and put in two solid motos at Thunder Valley.

"The goal for me this weekend is to get back on the podium, I really missed it at Glen Helen so I plan on being back up there this weekend. We made some great changes on my bike at Glen Helen that I think will go really good with the track in Colorado, so that's something that I'm pretty pumped on. Thunder Valley has always been a good track for me, I've been on the podium a couple times there and I really enjoy the crisp, clean air and the altitude, I've never had an issue with that. I think the bike will be really good, the Yamaha has a strong engine so the altitude won't affect my power too much."

"I'm really looking forward to Thunder Valley this weekend. The nerves are out after last weekend at Glen Helen and now that I know where I'm at fitness and speed-wise, I'm ready to put my head down and make the best of it!"

Stop by the Monster Energy/Yamaha Factory Racing team transporter on Saturday from 11:30 a.m. - 12:15 p.m. (time subject to change due to scheduling). Justin and Alex will be there to meet fans and sign autographs.

IF YOU CAN'T MAKE IT TO THUNDER VALLEY, TUNE INTO MAVTV AND NBCSN