The Monster Energy/Yamaha Factory Racing Team put in a solid ride for the opening round of the 2018 AMA Pro Motocross Championship on Saturday with Justin Barcia finishing on the podium in both 450MX motos to emerge third overall at the Hangtown Classic season opener. 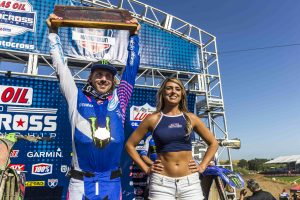 Barcia, who qualified third overall, headed into the first moto with a favorable gate choice as he piloted his YZ450F to a top-three position off the start. He battled with the group of front-runners on the opening lap where he held fifth until capitalizing on the opportunity to jump into a podium-position on lap six. Barcia held strong in third to capture a podium-finish in Moto 1.

In Moto 2, Barcia shot out of the gate once again to take on the second-place position as he rounded the first turn. He continued to charge hard on the opening lap as he overtook the lead mid-way through and maintained the top position until lap three when he dropped into second-place. Barcia continued to battle for a top position where he swapped spots back-and-forth with other riders before settling into third on lap 10. From there, Barcia held strong to maintain his third-place position en route to his second-straight podium at the opening round.

"It was a solid day for the Monster Energy/Yamaha Factory Racing Team with Justin Barcia finishing on the podium in both motos at the season opener. Justin put in a solid day in practice, got two great starts, led the second moto for a few laps and just put in a good day. We still have a few things he needs to work on fitness-wise but all-in-all for our first real race outdoors with the new 2018 YZ450F, it was a great day and we're looking forward to the rest of the series and Glen Helen next weekend in our back yard."

"It was a good weekend, a good place to start. We definitely have a few things to work on, not with the motorcycle too much, just a few things with myself fine tuning. I rode a little tight at the beginning of both races and it kind of showed but I'm pretty happy - I'm going to take all the positives out of this, for sure, going into Glen Helen. It's always great when you can be on the podium at the first race and show guys that you're going to be here throughout the season."

Monster Energy/Yamalube/Star/Yamaha Racing's Aaron Plessinger put in two hard-charging rides to secure a third-place overall finish at the season opener. In the first moto, Aaron battled through the pack to finish third and rode a strong and solid race to secure fourth in moto two. The combined moto scores were enough to earn Aaron the third step on the podium.