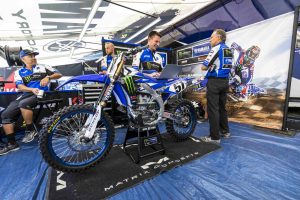 Barcia, who is the sole rider lining up for the Monster Energy/Yamaha Factory Racing Team at Round 1, had a strong start to the 2018 Supercross season with three podiums and two top-five finishes before sustaining an injury that forced him to sit out seven rounds. Barcia battled back to finish the series strong as he set his sights on preparing for a shot at the 450MX title this summer. With countless hours spent testing with the Monster Energy/Yamaha Factory Racing Team, Barcia heads into the weekend feeling refreshed and optimistic for a fresh start in outdoor motocross.

Barcia's teammate, Cooper Webb, will not be lining up for the Hangtown Classic this Saturday as he continues to recover from injuries sustained at Minneapolis SX. The Monster Energy/Yamaha Factory Racing Team recently announced Alex Ray as the fill-in for Webb, beginning with Round 2 at Glen Helen.

"I'm super excited going into outdoors, we've had a lot of great weeks testing in California at tracks like Glen Helen and Pala. I'm usually on the east coast before the season starts, so it's nice to be out here riding these tracks and working with the team. We've really been putting in a lot of hard work and we've dialed in the bike - I think the team really is on their "A game" and has the bike working super good.

And me as well - I feel like my fitness is great and after my showing at the beginning of the Supercross season, I know I was in a good position and I feel like in outdoors I'm in the same position. I should be a podium guy and I believe I will be a podium guy fighting for wins this summer. Hangtown is definitely a gnarly track, it's a tough race and being the first one, you want to get through it smart and show people what you've got at the first one."

Thursday night, from 6-7 p.m., stop by the Hangtown Block Party in the Palladio at Broadstone, located at 270 Palladio Parkway in Folsom, California, where Justin Barcia will be on hand to meet fans, sign autographs and give away posters. Saturday, stop by the Monster Energy/Yamaha Factory Racing team transporter from 11:30-12:15 p.m. (time subject to change due to scheduling). Justin will be there to meet fans and sign autographs.

IF YOU CAN'T MAKE IT TO HANGTOWN, TUNE INTO MAVTV AND NBCSN