With Monster Energy/Yamaha Factory Racing's Cooper Webb still on the mend from a fractured tibia and fibula sustained at Round 14 of the Monster Energy AMA Supercross Championship, the team has officially announced today that Yamaha bLU cRU rider Alex Ray will fill-in for Webb at select rounds of the 2018 Lucas Oil AMA Pro Motocross Championship, beginning with Round 2 at Glen Helen Raceway on May 26. 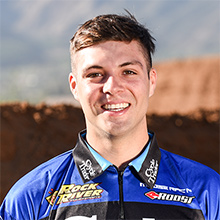 Ray, who piloted a YZ450F for the Cycle Trader/Rock River Yamaha Team in the 2018 Monster Energy AMA Supercross Championship, made great strides throughout the year, but came into the outdoor motocross season without any team prospects. The Monster Energy Yamaha Factory Racing team recognized Ray's efforts and presented the Tennessee native with this extraordinary opportunity. Ray will spend the next two weeks testing with the team in preparation for the Glen Helen National, and will continue riding for the team through the High Point National on June 16. From there, it will be a week-by-week assessment until Webb makes his return this summer.

"It's a dream come true to even be considered to ride for the Monster Energy Yamaha Factory Racing Team! I believe that with this great team and amazing bike I can really do some damage and have solid results in the Pro Motocross Championship. I've got some testing to do with the bike before lining up, but I'm confident that we will be super comfortable leading into Glen Helen."

"At first the injury didn't seem like a big deal, but after flying to California and visiting Dr. Wong, he recommended I get surgery to speed up the healing process. He put a plate and some screws with one longer screw holding my tib/fib together at the top of my ankle. I get that longer screw pulled out this week and the healing is going great! I'm much further ahead of schedule than originally planned. I should be able to start riding lightly, corner tracks with no jumping, the following week. As far as a return date to racing, we are still undecided. We will take it week-by-week to make sure I come back 100%. I want to make sure I can put my Yamaha up front where it belongs, instead of coming back early and unprepared. Thank you to my team, sponsors and fans for sticking behind me. I'll see you guys soon!"

The 2018 Lucas Oil AMA Pro Motocross Championship kicks off this Saturday, May 19, with the Hangtown Motocross Classic in Sacramento, California. The Monster Energy/Yamaha Factory Racing Team will be ready to go at Round 1 with Justin Barcia prepared to do battle in the 450MX class.