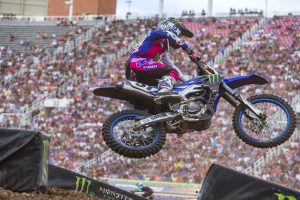 The 2018 Monster Energy AMA Supercross Championship hit the high altitude of Utah's Rice-Eccles Stadium on Saturday for the 16th and penultimate round of the series.

In only his third race back from injury, Monster Energy/Yamaha Factory Racing Team's Justin Barcia raced to a fifth place finish. Josh Hill, riding for the injured Cooper Webb as Barcia's fill-in teammate, fought from a stall and last-place position to finish 16th on the night.

Another daytime event schedule had Supercross gates dropping early, and challenging track conditions would play a factor all day. Barcia's qualifying speed put him fifth fastest heading into the Heats where he finished fifth in Heat #2. 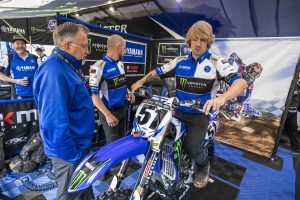 In the Main Event, Barcia got off to a top-ten start aboard his YZ450F and quickly vaulted himself into fourth by lap two. As the track continued to deteriorate, Barcia consistently battled with the track, looking for an opportunity to make up ground, eventually finishing fifth on the night.

Hill, who made only his second Monster Energy AMA Supercross appearance of the season on Saturday, was forced to line up in the LCQ, which he won. After stalling his bike in the Main Event, Hill dropped back to last place and spent most of the race climbing his way through the pack, ultimately finishing 16th for the day.

"Justin Barcia put in a solid top-five finish on a brutal track in high elevation here in Salt Lake City. Justin made progress throughout the day adapting to track conditions and the elevation and we looked good to be in a solid, podium-finishing position. However, we were set up in a bit of a tough spot with gate picks after Justin struggled off the start of his Heat Race where he finished fifth. Once the Main event started, Justin put some speed in early but struggled with a couple things on the track. His top-five finish is solid, but not quite the finish we were hoping for. It's a little disappointing because we have a podium finish in us and we let it get away today. For Josh Hill, he struggled with speed and track conditions all day. He had to go to the LCQ after failing to qualify from his Heat Race, which he won, which was a good confidence booster. But once the Main Event started the track conditions just didn't play into his favor and he struggled throughout the night. We're putting Salt Lake City behind us and heading into the final race in Las Vegas next weekend with a strong push to finish out on the podium. 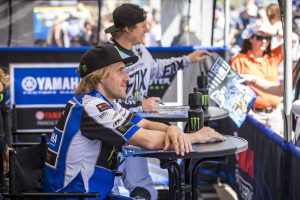 "It was a decent day overall with really good practice sessions for me. I was happy heading into the races. In fact, I felt the best I have in a while so I know the speed and fitness is back and the Yamaha was working really well. In the main event, I got off to a decent start and pushed in the beginning of the race to get in touch with the top-three. I had a couple good battles in the beginning of the race and then I rode a little bit tight at the halfway point. Toward the end of the race, I found some better lines and loosened up a bit and rode a lot better. But, it was too late to catch a podium position and that's frustrating. I missed a good opportunity to stay up-front all race and I'm not stoked on that. The podium in Vegas is the goal and I definitely have the speed, I just need to put it all together in the main event. 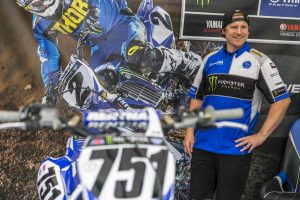 "The weekend in Salt Lake City started off a little rough, I didn't qualify very well out of practice and didn't make it to the main out of my heat race but I bounced back in the LCQ and got the win, which actually gave me some better ideas about racing lines so I could improve for the main. I ended up stalling on the second lap of the Main Event and that put me in last place, immediately. I could only pass my way up 16th by the end. I definitely felt the elevation and the track was really challenging. This weekend is something I can build on and I'll feel a lot more solid and ready to race in Vegas. 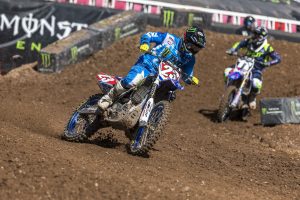 The Monster Energy/Yamaha Factory Racing Team will head to Las Vegas, Nevada next Saturday, May 5, for the final round of the Monster Energy AMA Supercross Championship.