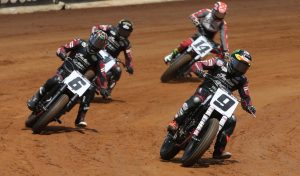 While he initially started the season back to back wins, until today's announcement, Mees' season took quite a hit with the point penalty and moved him from the series leader to fourth place. Mees' punishment also included disqualification from the race which resulted in the event's second place finisher, Kenny Coolbeth, Jr., being deemed the winner. The shuffle in the overall standings moved Coolbeth from second in points to now leading the series with 36 points.

The full announcement from American Flat Track is below.

Four tire samples from four different machines were taken after the Atlanta Main Event, and all were submitted to an independent lab for chemical analysis. Three of the samples were deemed to be in compliance with the benchmark sample provided by Dunlop. The sample from the #1 machine ridden by Jared Mees was not in compliance, however, and indicated the presence of several chemicals known to be used in motorsports to alter tire compounds.

According to the 2018 American Flat Track Rulebook, the rider of the #1 machine ridden by Jared Mees is in violation of Rulebook section 3.8.b (pg. 44): "Tires: No chemical applications are permitted."

Pursuant to the 2018 American Flat Track Rulebook, Section A3.1 Equipment Offenses and Penalties (page 84), this is a Category 1 offense: "An equipment violation that could potentially enhance the performance of a motorcycle used in competition."

Effective immediately, the rider of the #1 machine - Jared Mees - has been served with the following penalties in accordance with Section A3.3:

Revised results for the AFT Twins Main Event at the Atlanta Short Track are as follows:

Revised point standings are as follows: