High And Lows For Yamaha Factory Racing At Minneapolis Supercross 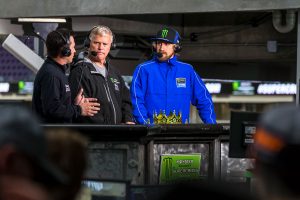 Justin Barcia made a strong return to racing on Saturday for Round 14 of the Monster Energy AMA Supercross Championship in Minneapolis, Minnesota as he put his Monster Energy/Yamaha Factory Racing Team right where his teammate Cooper Webb left off last round with a top-five finish in the 450SX class. For Barcia, it was consistency and poise that carried him to fifth-overall in the final Triple Crown event as he produced third, seventh and fourth-place finishes over the course of the three-Main Event format. 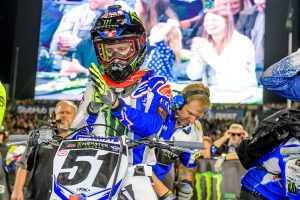 After a six-race hiatus due to a hand injury sustained earlier in the season, Barcia eased his way back into racing on Saturday with steady improvements throughout the day. When the gate dropped for 450SX Main Event 1, Barcia was quick to power his YZ450F into the third-place position and from there he rode a solid pace to finish third in his first race back. Barcia battled through muscle stiffness and arm pump in the second Main Event but fought his way from a top-ten start to a seventh-place finish. In the final Main Event, Barcia battled inside the top-five all race long to finish just off the podium in fourth, making for a solid debut back to racing.

Unfortunately, Monster Energy/Yamaha Factory Racing's Cooper Webb sustained a lower leg injury when he was landed on by another rider in a rhythm section on the opening lap of 450SX Main Event 1. As a result, Webb was forced to pull out of the event on Saturday as he awaits further evaluation on his leg.

"The Monster Energy/Yamaha Factory Racing Team started out the night with both riders, Cooper Webb and Justin Barcia, returning for the third and final Triple Crown event, but we had our ups and downs. It was great to have Barcia back, he started the day little rusty in practice but made improvements throughout the day and ultimately rounded out the top-five in his first race back. The downside was at the start of the first Main Event, Webb crashed on the first rhythm section and injured his lower right leg. He was taken to the Alpinestar Medical Unit where he underwent evaluation and was finished for the night. He travelled back to North Carolina and will have further evaluation with his personal doctors. We're looking forward to Foxborough next weekend and hoping that Cooper Webb will be able to make a return." 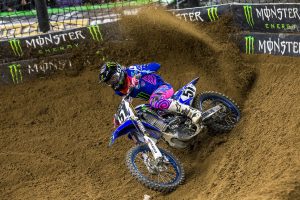 "It was my first race back from my injury and I feel like I made good progress all day. I was a little stiff in the morning, the intensity was pretty high off the bat like it always is but that's why I felt like I needed to come back because it's hard to get that type of intensity at home. The track changed a lot during practice and I struggled a little but I kept my head screwed on straight and we made a few changes to the bike but it was awesome all day. The second Main was the toughest for me, I got pretty tight from using the muscles that I haven't used in a while so I ended up getting a little arm pump but we were able to come back in the last Main and finish strong with fourth. It was a mentally tough day, it was super challenging and my body was tired for sure but we ended up finishing out on a positive note. I think it was great that I came back at this race in Minneapolis and I really look forward to next weekend in Foxborough." 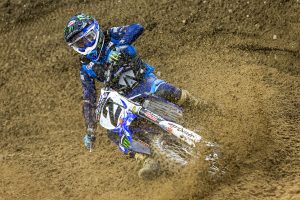 I'm extremely bummed about the outcome in Minneapolis, especially after the momentum we had coming into the weekend. Right off the start of the first Main Event I was involved with some carnage in the rhythm section and I ended up getting landed on. As of right now, it looks like a fractured tibia but I have an appointment with an orthopedic specialist on Monday to see the final word. Thank you to my sponsors and everyone in my corner, I'll be back soon."