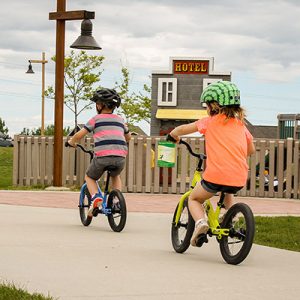 Learning to ride a bicycle is one of the greatest joys for a child as it helps boost their confidence, helps develop motor skills and spatial awareness, and provides a sense of freedom. The problem is, getting to the point of mastering balance, pedaling, and steering on a traditional bicycle can be overwhelming and frustrating for a little one. Strider has helped alleviate the stresses of learning to ride a bicycle with its 12 Sport balance bike. 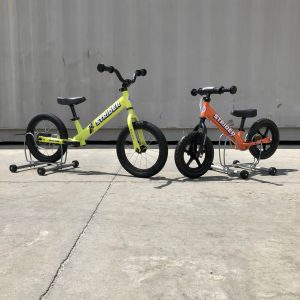 Designed for children 18 months to 5 years old, by doing away with clunky pedals the 12 Sport encourages kids to use their feet for support and momentum and then as they learn to manipulate the bike and get better at balancing they can then scoot and coast with their feet up to their heart's content. Parents have been in awe as to how easily a child can learn the basic skills of operating a bicycle when starting out  on a Strider balance bike; and are amazed as to how quickly and seamlessly the child graduates to a traditional pedal bike-often much sooner than those that learn with the aid of training wheels.

While the 12 Sport is the company's most popular model, the new 14X could soon give it a run for its money. Comprised of the same quality design and craftsmanship as the 12 Sport, the 14X offers the best of both worlds as it's a balance bike that can be easily converted to a traditional pedal bike. The 14X is slightly taller than the 12 Sport but that's mostly due to the wheel size, 14-inches with pneumatic rubber tires versus 12-inches with puncture-proof polymer tires, respectively.

The 14X also has the same ability to accommodate the needs and comfort of a growing child with an adjustable seat and handlebars. And while it's intended for children a little older (3-7 years old) than the 12 Sport's target audience, the 14x is still rather lightweight, coming in at only 12 pounds as a balance bike and then weighs 15 pounds with the Easy Rider Pedal Kit installed.

Once a little one has mastered balancing, is extremely proficient at coasting and maneuvering around obstacles, and is ready to tackle pedaling, converting the 14x from balance bike to pedal bike is extremely easy. Included in the packaging is the pedal kit that consists of a crank, pedal, and chain assembly as well as a chain guard.

To start you remove the footrests from the underside of the frame by unbolting the single bolt that holds them in place. The rear wheel comes with the rear sprocket installed, so it's just a matter of removing the plastic sprocket guard, slipping the chain over the sprocket, sliding the crank assembly into the recessed section on the underside of the frame (where the footrests were mounted), and securing it in place with the footrest bolt. Then you simply slide the chain guard in place and use the supplied bolt to mount it to the back of the frame. It seriously only takes but five minutes to make the conversion.

With a narrow pedal profile and short crank arms kids can quickly adapt to the new mechanized setup of the 14x as they can still use their feet for balance and to help them get started and then use the pedals to keep them moving. The pedal kit features a traditional coaster brake so once they outgrow the 14x moving up to a standard bicycle is not a problem.

As a balance bike the 14x offers the ability for children to learn the basics of riding in a natural and comfortable setting and then with its versatility of turning into a pedal bike it can grow with the child's skill, helping them become highly proficient two-wheeled masters and ready for a mini moto like a Yamaha PW50 in no time.