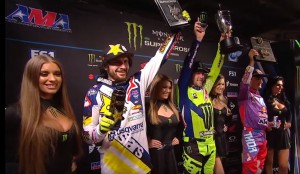 
Who had the best night

TS: Zach Osborne in my opinion. ZachO & Forkner both went into St. Louis with Red number plates. Forkner folded under pressure and we're back to only one red plate.

MM: Wacko Osborne of the Rockstar Husky team for getting the 250 win, stopping the PC Forkner train, and having some momentum going into the first 250 shootout of the year.

KB: The West Coast had the best night! 450 Main, our top guys took it all! Tomac, Anderson, Musquin and Peick in the top 5. Come on east cost guys... where are you?

EE: Osborne. He rode solid and kept it together while still putting down the heat.

Well I triedâ€â™‚ï¸ hit a kicker on the dragon and got a buck as most of u saw. Lost my flow and then got together with a lapper and ended up 5th. As far as my little "tantrum", I prolly should've calmed down a bit before I said something but hey tempers are high it's a close championship and it's not over. I'm gonna do a live video at about noon eastern time to just chat and answer some questions @shepherdphotos

: Forkner did, considering only one rider was leaving St. Louis with the red plate... it wasn't Forkner.

MM: Austin Forkner of the Pro Circuit team for throwing away the win with a brain fart in the final laps of the 250 main event.

TO: Forkner. Two crashes and losing the 250 east points lead.

KB: Davalos came in LAST Place. Not a fun place to be for a guy who is usually up near the top.

EE: Probably Tomac. Yeah he won another race but with each race he wins races and the more Anderson continues to be consistent, his mistakes and issues from earlier in the season have to be haunting him.


What was the best or most exciting thing YOU saw all evening?

TS: Either Tomac lapping up to 8th or Forkner buckling under Osborne's pressure

TO: Osborne putting pressure on Forkner and forcing Forkner into a mistake.

KB: Eli Tomac taking 1st place... wearing GREEN. If a orange, blue, yellow or red bike would have won... there would have been some sad Leprechauns.

EE: Ask me next week.


With Anderson having a 42 point lead with six races to go in the season what do you think his strategy will be? Layup and secure a championship or ride 100% for each and every win?

Just a lil Juice for the Goose âœŠ

: I think he needs to stay focused on himself and not the points lead. Racers are more likely to get hurt when they back it down a notch. If you're lining up Not Looking to Win, you shouldn't be racing. I think this is Anderson year!

MM: El Hombre has not been hitting the deck lately so he is a much more solid rider these days. He just needs to podium out the rest of the way which will not be difficult for him to grab the title in Las Vegas. No DNF's is a must.

TO: He says he wants to beat Tomac straight up, but why risk anything when the championship is his to lose?

KB: I think he should ride each race like it's his last race. Ride good. Ride smooth. Ride as fast as you are comfortable with... and Race to the end.


Eli is obviously the fastest guy out there on any given day, but why do you think he struggles with consistency?

: He struggles with consistency because he the fastest guy out there... his mental game isn't all there in my opinion.

TO: Loses concentration and makes stupid mistakes. If Tomac figures it out he will win everything the next few years.

KB: He is the fastest and I think that when you are riding that line... what are small mistakes to "slower riders" turn into big mistakes for faster riders. I had a trainer once who used to say that practice is not what makes a winner as "lots of practice does not make perfect... Only Perfect Practice Makes Perfect" he used to say. Same thing... It does not matter how fast you are if you can't execute perfectly.

EE: I have no idea but I wonder how many sports psychologists' have some knocking on his door?


What are your predictions for this first 250 showdown we'll see this coming weekend?

: I think its going to be exciting! This round could make it or break it whether you're on the West or East series. The points are definitely going to get shuffled around for the Lites class.

TO: Osborne will win

KB: I predict the West to dominate.

EE: I'm hoping it will be some of the best/most exciting racing we've seen all season. That last Triple Crown was awesome but I expect the east/west shootout surpass it.