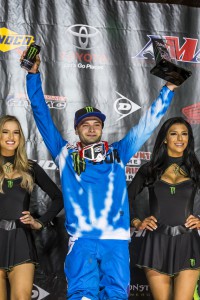 Monster Energy/Yamaha Factory Racing Team's Cooper Webb continues to make strides in the 2018 Monster Energy AMA Supercross Championship, as he claimed a season-best 3rd place finish on Saturday for Round 10 at the world-renowned Daytona International Speedway.

Saturday also marked Webb's first pro race at the unique Daytona Supercross, and the 22-year-old 250SX West Champion showcased his strength on the rough and challenging track. With a top-five qualifying position earlier in the day, Webb entered the night show with confidence as he commanded the holeshot and early lead in 450SX Heat 2. Webb led four laps before a heated battle with Eli Tomac ensued and Webb ultimately went down. He quickly remounted to salvage a 4th place transfer position into the Main Event.

In the 450SX Main Event, Webb started just inside the top-ten but he quickly powered his YZ450F through the pack and into podium contention within the first few laps. The North Carolina native then climbed into the 2nd place position where he made a charge toward race leader Justin Brayton. Webb once again battled with Tomac, but this time for the 2nd place position. With only four laps remaining in the 18-lap race, Tomac was able to get around Webb for 2nd and Webb ultimately finished with a hard-fought 3rd place.

Webb's podium finish earned him valuable points toward the 450SX Championship, where he sits 7th overall with seven rounds remaining in the series.

"Overall, we had an excellent night. It was definitely a step in the right direction. Cooper has been making improvements the last few weeks and it really showed tonight. I still feel like maybe we let the win slip away from us, but it was a good event."

"Daytona was really good this year. It was the first time I ever raced it, but I grew up coming here as a kid to watch, so it's pretty special to be here now in the 450 Class. Overall, it was a solid day. We did a lot of great testing this week at Justin Barcia's house to get a great setting for here at Daytona. It was good for me to get my first overall podium especially at my first-ever Daytona, I think I was a lot closer to that top step. I'm looking forward to the rest of the year!"

The Monster Energy/Yamaha Factory Racing Team will head to St. Louis, Missouri next Saturday, March 17, for Round 11 of the Monster Energy AMA Supercross Championship at The Dome at America's Center.

Monster Energy/Yamalube/Star/Yamaha Racing's 250SX East efforts were put on hold as both riders sustained injuries leading up to Round 10. Dylan Ferrandis sustained injuries at the previous round in Atlanta while battling for an overall victory and Colt Nichols sustained an arm injury in a practice crash during the week.