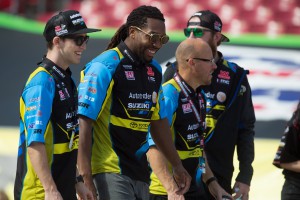 Huntersville, NC (February 26, 2018) - The big news entering round eight of the 2018 AMA Supercross series was Autotrader/Yoshimura/Suzuki Factory Racing team 250 rider Justin Hill would be racing the all-new Suzuki RM-Z450 in the premier class. The defending 250 West Supercross Champion wowed the 42,411 fans at Raymond James Stadium by logging the fourth fastest qualifying time, a heat race victory, and a shot at the main event win. Suzuki RM-Z450 teammate Malcolm Stewart scored his best finish of the series in eighth. Weston Peick crashed while running in fifth and ended up just outside of the top ten. RM-Z250 rider Jimmy Decotis got caught up in a second turn crash and charged his way from 20th to 10th.

Autotrader/Yoshimura/Suzuki Factory Racing's Hill had high expectations entering his first 450 Supercross race. The Yoncalla, Ore. native was fast from the start. Hill used his RM-Z450 power to routinely jump a tricky triple-quad-quad section that very few others dared to even try. With a fourth-place main event start, Hill methodically worked his way to within striking distance of the leader. Unfortunately, he fell after trying to cut inside while making a pass for the lead. Hill came back to finish an impressive sixth place.

Stewart spent last week at the JGRMX headquarters in North Carolina testing suspension settings on his Suzuki RM-Z450. The Haines City, Fla. native looked great in his home state, placing eighth in what was his best result of the series thus far.

Peick looked ready to improve on his series-best fifth place finish by running the lead pace for half of the main event. Unfortunately, the tricky sand rhythm section sent him to the ground. He recovered and finished 12th. Peick sits fifth in the point standings - less than ten points from third.

Suzuki RM-Z250 mounted Jimmy Decotis had the speed to finish on the podium for a second straight weekend, but a crash derailed his chances. Still, Decotis fought his way from 20th on the second lap to 10th by race end. He sits fifth in points.

Teammate Kyle Peters was in position for a great finish, but he was knocked down by another rider a few laps into the main event. The North Carolina native fought back to 13th. 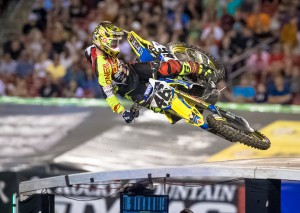 Justin Hill [450 Class, Sixth Place]- "I was less than intimidated by the 450 guys. The speed was easier than I thought it would have been. I was comfortable at battling the front runners. The experienced guys seem to do less dumb stuff. Riding with the smart guys seems to work better for me. As I get more involved in the 450 class I feel like I could be the guy, because that type of riding style suits me well."

"The first few laps after I got up following the crash I was trying to regroup. I had a bent front brake lever, and it was hanging pretty far down. Then I started getting the quad jump again. There was no way I was going to do that section without a front brake. I'll have another week on the Suzuki RM-Z450 and head to Atlanta with new goals. I'm looking forward to it." 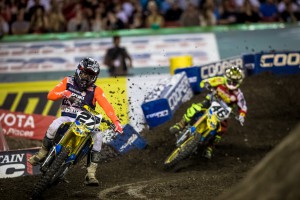 Malcolm Stewart [450 Class, Eighth Place] - "What a night! It was so hot in Tampa that I thought I was racing the Nationals [laughter]. We had some good testing on the new Showa BFRC shock with the team before traveling down to Tampa. We got the bike more in tune and the results are starting to come around. Thanks to everyone for sticking by me my entire career. The next stop is Atlanta, which I'm really looking forward to!" 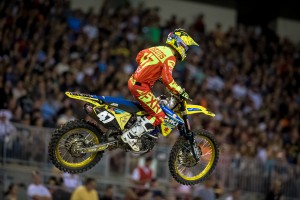 Jimmy Decotis [250 Class, 10th Place] - "I felt a little bit off in the beginning of the day and struggled to get into a groove. Things started coming together in the final practice. The heat race went really well. I worked to fourth place. I had a really good jump off the gate in the main event, but missed a shift halfway down the straightaway. Someone crashed in the second turn and I did all I could to avoid his rear wheel, which was spinning pretty fast. Unfortunately, my front wheel hit his rear wheel and I went down before I knew what was happening. I laid there so that I wouldn't get hit by the rest of the field, and then picked up my RM-Z250. I put my head down and charged as best as I could. It's unfortunate stuff like that happens, especially after finishing on the podium last weekend, but that's why we race nine rounds. I'm healthy and happy, so I'll keep building and get ready for Atlanta." 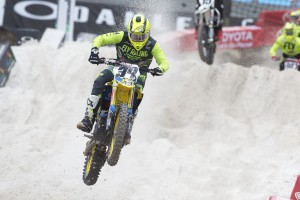 Weston Peick [450 Class, 12th Place] - "That was the first race at Tampa in a long time. It was nice to go somewhere new. It was a hot day, with a lot of humidity. Practice went well for me, despite not feeling very in tune with the track. I tangled with some people in the heat race and had to work from about tenth place to fourth by the finish. Before the heat race we softened up the shock a bit, because of the sand section and the ruts. I had a good start in the main and was around the top five for over half of the race. Then I made a weird mistake in the sand section. I cross-rutted off the face, landed, hooked left, and went over the bars. I hit my thigh, and it took a while to get the bike out of the sand." 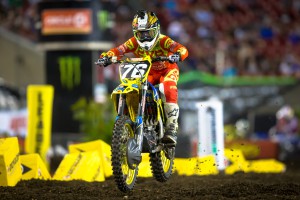 Kyle Peters [250 Class, 13th Place] - "I was in good position during the heat race, but I rode too timid during the opening laps. After running sixth on the opening lap I made a bobble in the sand section and dropped back a few spots. A few laps later I got taken out while going past the mechanic's area. I tried to salvage as many points as I could, but I can't be that far back in the pack. I'm really disappointed and frustrated. I need to bring everything I'm doing at the practice track to the race track." 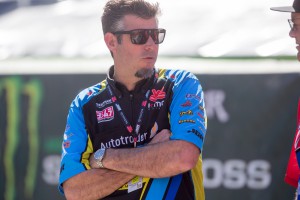 Jeremy Albrecht [Team Manager] - "Overall, everyone was better. Hill was definitely impressive. He would have been the podium for sure if not for the crash. I just wanted him to get experience and show it, and I feel good about next year. Even though he rode so well, we have to be patient and stick to the plan. Hill remains focused on building the Suzuki RM-Z250 program, and he will move up to the 450 class next year. As for Stewart, it was a career best finish for him. He raced with the new Showa BFRC shock, which performed very well. Stewart is improving every week. Peick was solid. He had a good race going, but crashed in the sand. Peick has been a little flat in the middle of the main events, so he's going to change up a few things in order to have more energy."

"In the 250 class, Decotis was riding well all day. He crashed, but recovered well in cracking the top ten. Peters was riding better than last week. He struggled in the sand and had a crash in the main, but he improved over last week."

"The team is traveling to Atlanta on Thursday to spend time with our friends Autotrader. We'll take part in Friday's press day, and then enjoy racing at what is our hometown Supercross race on Saturday."

The Autotrader/Yoshimura/Suzuki Factory Racing Team will travel to Atlanta for round nine of the 2018 Supercross series on Saturday, March 3rd.