(Press Release) Huntersville, NC (February 5, 2018) - The Autotrader/Yoshimura/Suzuki Factory Racing Team rolled into Oakland, Calif. with high expectations. In front of 48,146 fans at Oakland's Alameda County Coliseum, defending 250 West Supercross Champion Justin Hill scored a hard fought third place finish in the main event. Weston Peick again showed great speed on his RM-Z450, placing third in his heat race. Justin Bogle looked increasingly comfortable on his RM-Z450 in only his second race back. Malcolm Stewart was on target for a breakout race in the 450 class, as was Phil Nicoletti in the 250 ranks.

Hill has been improving at every round on his Suzuki RM-Z250. The technical Oakland track played right into his wheelhouse, as he dissected every rhythm section in fighting his way to the front. At one point within striking distance of first place, but a few minor mistakes relegated the Oregon native to third. The podium position moved him up to seventh in the points standings. Hill is excited to build on Saturday night's performance.

Peick used tenacity and raw speed to muscle his way to a top-five position through the first turn. Unfortunately, the vicious conditions halted his progress in the latter stages of the main event. Peick recovered to score 12th on the evening.

Bogle spent the week testing in the lead up to Saturday's race at the JGRMX headquarters in North Carolina. Bogle made progress in Oakland, working his RM-Z450 through the pack and logging consistent lap times.

Stewart returned for another race under the Autotrader/Yoshimura/Suzuki Factory Racing 450 awning. Stewart rode a torrid pace in his heat race, but a crash relegated him to the Last Chance Qualifier. After digging deep to earn a spot in the main event, injuries sustained from the heat race crash forced him to retire early for the night.

Nicoletti was the recipient of bad luck when he came together with another rider in the main event and fell to the ground. He was then struck by a rider. The impact caused him to pull into the pits and call it an evening. 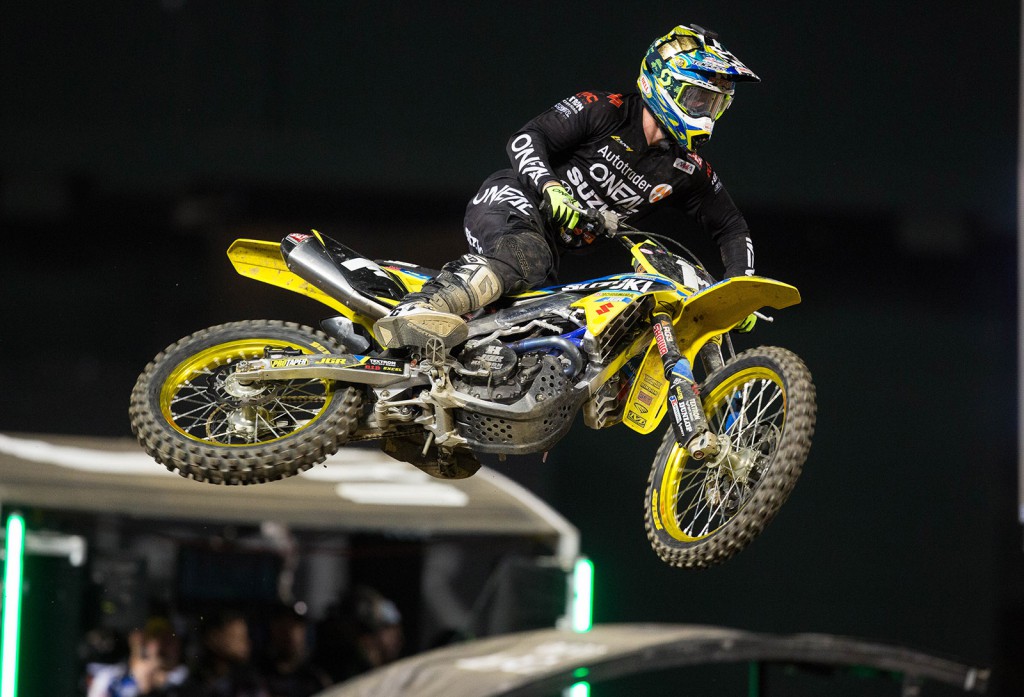 Justin Hill [250 Class, Third Place] - "The day was honestly pretty average. It wasn't like, 'This is going to be the day to end all days.' I felt decent in practice. I didn't do anything spectacular, but everyone was close on time with the last practice. I knew that the track was going to break down and get really difficult, which would work to my advantage. I wasn't rushing the track, because if you did then you were going to hit the deck pretty hard. When I came through the first turn in a decent spot it gave me a bit of oxygen to breathe and go to the front-runners."

"I've been saying the whole time that I want to battle with some guys and cause a ruckus. It was clean racing with Joey [Savatgy], and it put me back into a good mindset. I remember how it feels again. That's the silver lining. It was a third, but a third that could have been a first. I'm learning more and more about myself, and also the RM-Z250. It feels good to be a guy on the box again." 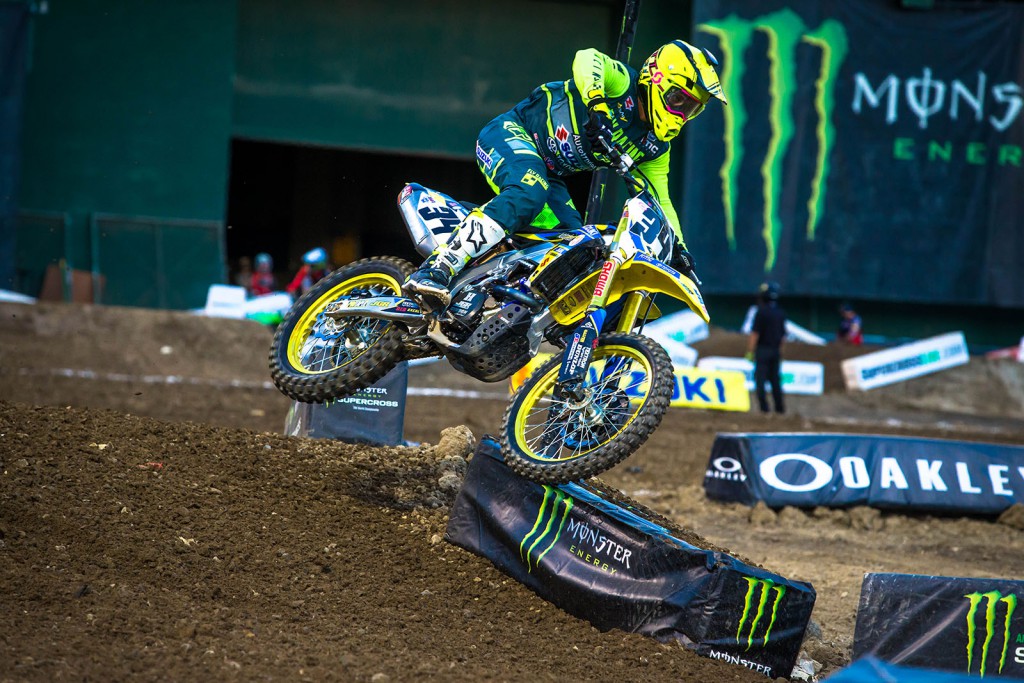 Weston Peick [450 Class, 12th Place] - "During track walk in the morning I knew that the dirt was going to rut up, but I had no idea it was going to be nearly that bad. Even before the main event began the track crew went out and smoothed out the two rhythm sections, but the ruts returned almost immediately. I think it was a result of the dirt sitting outside all year and collecting moisture."

"This weekend I wasn't getting the best launches off the pad, but I still made it work. In the main I was right behind the leaders going into the first turn, and I figured they would push wide. I stuck to the inside and made it work. For a while I was in good position, but then I began making mistakes. Then, with about four laps to go, I cross-rutted on a jump and did an endo off the track. My RM-Z450 had gotten stuck on a hay bale, so it took about 20 seconds to get back going. That dropped me about four positions." 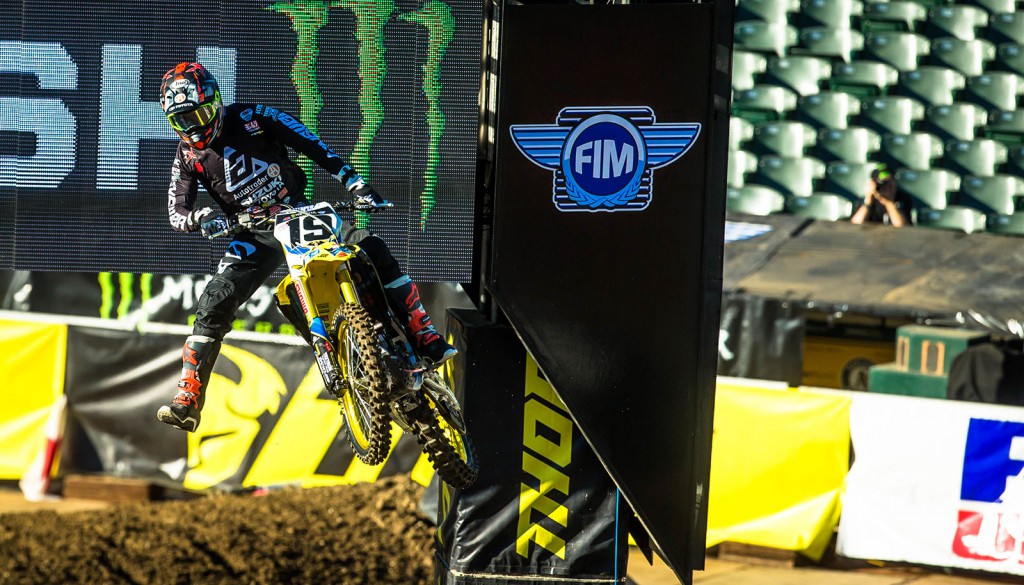 Justin Bogle [450 Class, 17th Place] - "After spending the week testing in North Carolina and having a race under my belt, I was much more comfortable this weekend, even though the results don't show it. Bad starts really put a damper on my night. Then, in the main, I crashed and was stuck between lanes of the track for a while. I struggled through another rough night, but we made progress with the bike and myself. We'll continue to get better as we go." 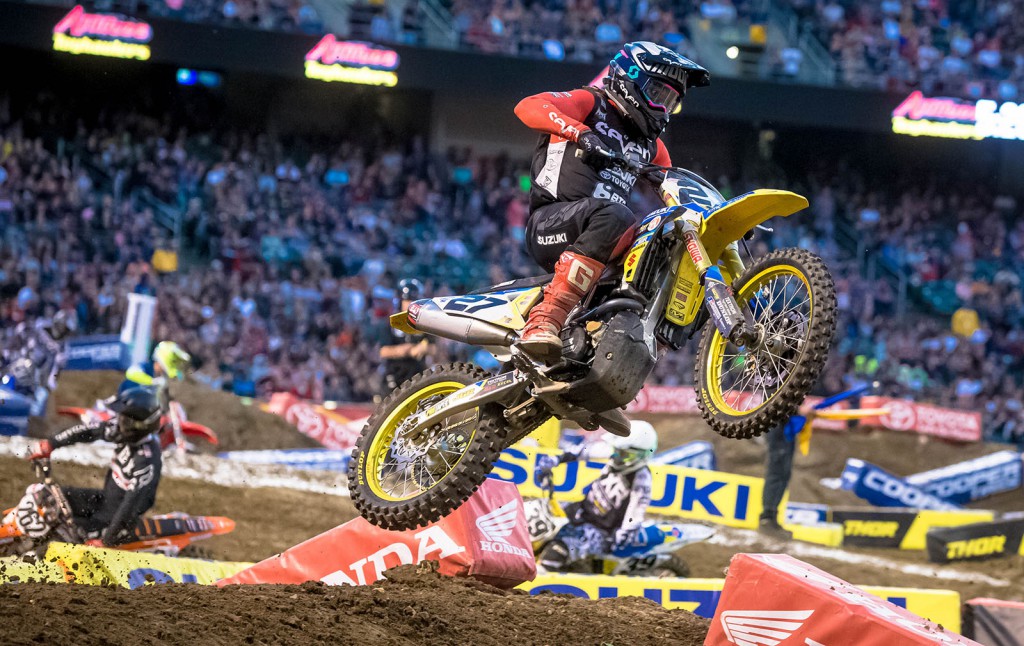 Malcolm Stewart [450 Class, 22nd Place] - "Oakland didn't go as planned. I had a get-off in the heat. Then I got going, but made another mistake a few laps later. I was riding in so much pain during the main event that I couldn't hold on anymore and had to call it quits. Nights like that will bring the best out of you, that's for sure. We'll keep moving forward. There's still lots of racing left. Thanks to everyone for sticking behind me." 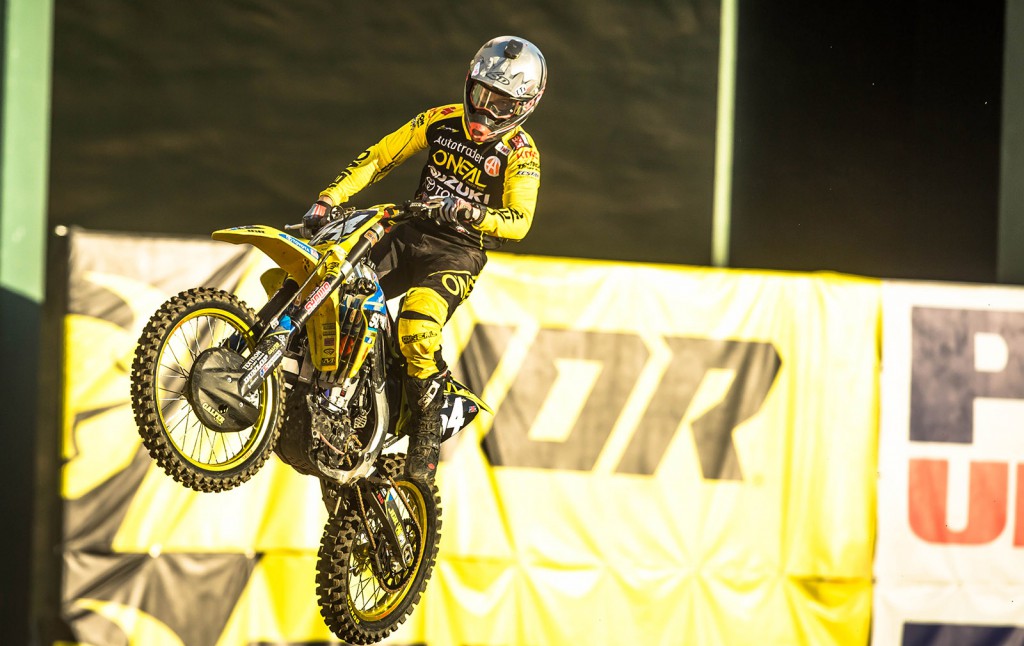 Phil Nicoletti [250 Class, 22nd Place] - "I don't even know where to begin. I'm banged up from the main event crash. I re-injured some old injuries that I suffered at the beginning of the season. The crash was a racing deal. I'm super gutted, and at a loss for words. I don't even understand it. It's difficult to put your time in during the week and feel good, only for things to crumble on Saturday. The good thing about racing is that there's always next weekend, but at this moment I need a break. I'm excited to get back to North Carolina after the San Diego Supercross and work toward getting the results.

"Jeremy Albrecht [Team Manager] - "The track was gnarly. It was the type of situation where you needed to make the jumps as many times as you could and limit mistakes. I'm really happy with how Hill rose to the occasion. He was riding well all day. After daytime qualifying we didn't talk about how he needed to go fast. Instead, we focused on how Bogle was taking a few lines in the heat race that Hill should use. He executed and put the Suzuki RM-Z250 on the box. If Hill wasn't sick all week then I think he would have had the energy to finish second or first. Nicoletti was riding well, but had that crash in the main."

"Peick put himself in a good position for the main. He gave it everything he had, trying harder than I've ever seen him try. He fought the track the whole time. I thought he was going to pull through in the main, but he made too many mistakes. All of the 450 guys struggled in the main, having crashes or costly mistakes. Stewart caught his leg in a rut in the heat race and was in a lot of pain. He wasn't going to line up for the LCQ, but he fought through the pain."

The Autotrader/Yoshimura/Suzuki Factory Racing Team will head to San Diego, Calif. for the sixth round of the 2018 Supercross series on Saturday, February 10th.