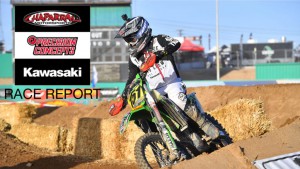 The Chaparral Motorsports, Precision Concepts, Kawasaki team got off to a great start at the 2018 Adelanto Big 6 grand prix season opener. Justin Seeds overcame an early mishap, and after falling back to fifteenth, charged to fourth place by the finish. Additionally in the Pro class, Blayne Thompson was nursing a foot injury and came back from a scary first-lap crash to finish eleventh. In the Pro II class, Clay Hengeveld came from the edge of the top ten to take the lead on the first lap and never looked back. Lastly, in the Vet AA/Expert race, team manager Robby Bell took the lead on the first lap and held it all the way to the checkers. 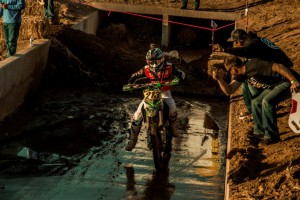 Justin's season got off to a great start at the 2018 Adelanto BIG 6 as he netted a fourth place finish. Through the first turn, he was battling for the hole-shot before settling into third place early in the race. Unfortunately for Seeds, he would have to come into the pits for an unscheduled stop when his bars rolled back after casing a big jump in the infield section of the track. The Chaparral Motorsports, Precision Concepts, Kawasaki crew got him back out as quick as possible, but Justin had dropped back to fifteenth place following the pit. From there, Seeds put on an incredible charge, passing up to fourth place by race end, even after a second pit stop for a splash and go on the second-to-last lap.

"I was running third [early on], but started making little mistakes and dropping back," said Justin. "Then I cased a really big jump and my bars ended up moving down on me. I had to run that whole lap with the bars a little messed up [before I] came into the pits and got that all fixed up. After I went back out, I put my head down and never gave up. It felt amazing [to have that kind of ride]. I knew I had been putting in the work in the off time. Now we'll carry that into the next round." 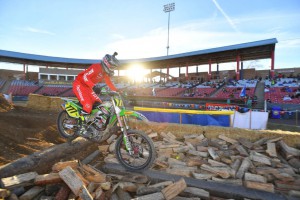 Blayne was carrying an injury into the weekend after breaking his foot just a few weeks prior to the event. His main goal was to earn a few points, stay safe, and be able to build into the season. Unfortunately, that plan didn't get off to the greatest start in the pro race. Thompson was rounding the second corner at the edge of the top five when the riders ahead of him kicked up a big dust cloud. Unable to see the terrain for second, he hit something hidden and was instantly sent down to the ground in a vicious fall. After taking a few minutes to sort himself (and the bike) out, Blayne picked himself up outside of the top twenty and put in a smart, methodical charge to catch up to eleventh at the checkered flag, earning solid points towards the championship under difficult circumstances.

"Well, the beginning of the race didn't go as we had planned," commented Thompson after the event. "In the second corner I ended up taking a big old crash. I sat down for a second, making sure the foot was alright. Then I got back up and decided I needed to get back on the bike to get some points. I was thinking in my head that I just needed to get half the laps to get some points. Then, after I got halfway through and pitted my foot still felt pretty good. So I just kept riding my race ended up finishing the whole hour and a half. It's definitely not the way we wanted to start out, but I'd rather have a few points coming into the next round then none. The foot's feeling better so we'll be ready for the rest of the year." 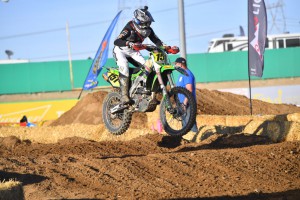 The season got off to the best possible beginning for Clay, as he took a commanding win in the Pro 2 class. It wasn't the smoothest sailing on the first lap, however. After coming through the first turn around seventh position, Clay quickly moved up to third place. Then, a rider fell right in front of the Chaparral Motorsports, Precision Concepts, Kawasaki rider, leaving him nowhere to go but to pile up behind him. Hengeveld was quick to get going again, just inside the top ten. From there, he put in an impressive first-lap performance, passing all the way up to the lead. Clay never looked back, maintaining his lead even after an unplanned second pit stop for fresh goggles, taking the first win of the BIG 6 Pro 2 season.

"The race went really good," said Clay post-race. "Got off to a decent start and then actually got into a small pile up. I was in about eighth place by the time I got out [of the pile up]. Then, I just put my head down and charged on that first lap to get into the lead and never looked back. It feels great [to start the season like that]. I'm very happy to be under the Chaparral Precision Concepts, Kawasaki team and I'm going to use this momentum to win the next race. I can't thank the team enough for this opportunity and I just want to show them everything I can do!" 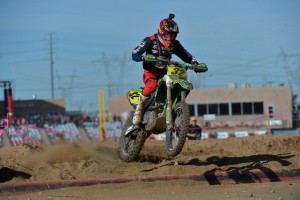 Race team manager Robby Bell signed up in the Vet AA/Expert race and took a comfortable win. Robby started the race in second, before losing a couple spots to Nick Burson and Mark Tilley. After moving into third, Bell got a little too close for comfort to Burson before making the pas stick. He then set his sights on Dirt Bike Magazine's Tilley, passing him just before the close of the first lap and holding the lead to the finish.

"Man, the vet class is stacked!" exclaimed Bell. "Nick and I got a little closer than we wanted. I was charging around the outside of a fast corner and he was fading out to my line. We touched and I flew off the track. I remember looking back to make sure Nick hadn't crashed, thinking, 'you alive?' When I saw he was good, I started to charge after the lead. Later Mark told me his whole goal was to lead to the asphalt straight [just before the stadium], and I just had to pass him like two corners before that, just crushing his dreams. I had a blast out there and can't wait for the next one!"