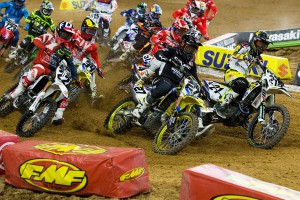 Huntersville, NC, January 15, 2018 - The Autotrader/Yoshimura/Suzuki Factory Racing Team made their presence known at the second round of the 2018 AMA Supercross series in Houston, Texas. Weston Peick scored a second consecutive top-five finish, Malcolm Stewart impressed in his first fill-in race for the team, and Justin Hill remains in the 250 West points chase. 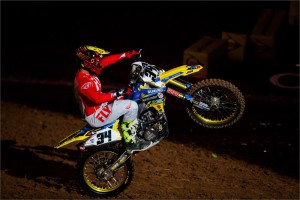 Peick continues to hone his Supercross skills throughout the week and the effort is paying dividends. With a fifth-place heat race finish, Peick put himself in a great position for the main event. When the gate dropped, his Suzuki RM-Z450 rocketed to a third-place start. He kept pace with the early leaders while riding a smart race. Peick crossed the finish line in fifth - his second top-five finish in as many tries - and currently sits tied for fourth in the point standings. 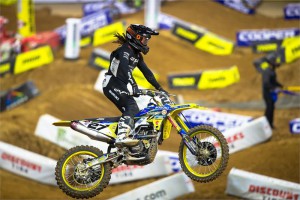 News broke early in the week that 2016 AMA 250 East Supercross Champion, Malcolm Stewart, was brought on board to fill in for the injured Justin Bogle. "Mookie" didn't disappoint, scoring seventh in his heat race and 11th in the main. That is very credible for a rider who only had a few days of testing the Autotrader/Yoshimura/Suzuki Factory Racing RM-Z450. The ever-popular Stewart will set his sights higher this weekend. 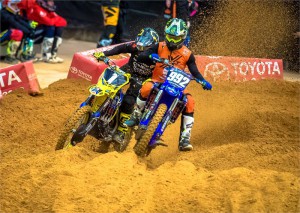 Defending 250 West Champion, Justin Hill, came to Houston with a chip on his shoulder. The Oregon native was determined to win; however, he felt off all day. It has been said that championships are won on the bad days. Hill fought through adversity to score a top-ten finish in the main and is still very much in the title fight.

Riding through the pain of a rib injury, 250 West competitor Phil Nicoletti used grit and determination to score a 12th place finish. This came after Nicoletti was unable to ride all week. With more down time, Phil expects a better result at Anaheim 2.

Weston Peick [450 Class, Fifth Place] - "This weekend went well for me. The goal was to back up my top-five finish from Anaheim 1, and I succeeded. The track was technical and constantly breaking down, with big whoops and lots of ruts. Houston proved that I can handle the ever-changing conditions. I'm excited for Anaheim 2. My next target is to get on the podium. With good starts and consistent lap times I should be able to achieve that. I'm really gelling with the RM-Z450, and I like the progress that we're making."

Malcolm Stewart [450 Class, 11th Place] - "I tell you, going eight months without a gate drop feels like forever! It's great to be back doing what I love to do. I have to give a huge shout out to the Autotrader/Yoshimura/Suzuki Factory Racing Team for giving me the opportunity to race. I appreciate the fans for sticking by me through thick and thin. The Houston fans made me feel like I was home again, so thanks! I'm looking forward to getting more time on the bike and making a big impact at Anaheim 2." 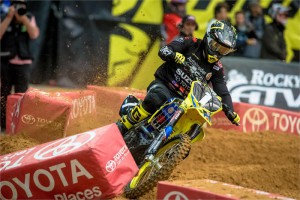 Justin Hill [250 Class, 10th Place] - "I struggled all day and felt off. I've never had an entire day where I made zero progress. From the very first time my wheels touched the track, all of the way until the checkered flag flew in the main event, I didn't get any better. My comfort level was off. We had a few minor tweaks that needed to be made to the rear suspension on my bike, but I didn't ride the RM-Z250 for what it was worth. I was in a funk."

"It's difficult, because I had the speed at Anaheim 1, but bad starts kept me from running towards the front. At Houston, the speed was not there. It was a total 180-degree turn from the opening round. I'm definitely disappointed in myself. Everyone on the team wants to help, and I'm grateful for their support. I will be working with a few members of the team this week to try some different settings. I've never wanted to win so badly."

Phil Nicoletti [250 Class, 12nd place] - "The track was very demanding. I struggled to find a flow after not riding all week. I had to take time off after my Anaheim 1 crash in order to let my body heal, so I knew it would be challenging to find a good feeling in Houston. I went to the doctor after the Anaheim opener. It was discovered that I had a few cracked and misplaced ribs. I'm looking forward to having a bit more time to let my body heal before coming back strong at Anaheim 2."

Jeremy Albrecht [Team Manager] - "Overall, there were quite a few positives from this weekend. Weston had a solid ride. He improved from last week. Malcolm was doing really well for having been on the Suzuki RM-Z450 a few times. With more time on the bike he should have a better result at Anaheim. Malcolm was great to work with. He was super positive and he loves the bike. It was great that Malcolm also went to the post-race press conference. He wants to be involved, which is awesome."

"The Houston track was super gnarly and very technical, with really challenging whoops. Hill crashed in the whoops in the first timed qualifying session, and I believe that threw him off his rhythm. Justin got hit in the first turn in the main event and lost his rear brake. It was tough for him to manage the track without a rear brake, given how many bowl turns there were. As for Nicoletti, he rode well considering how banged up he was. He was in pain every time he rode, but he fought through it. I expect everyone on the team to come out swinging at the next round."

The Autotrader/Yoshimura/Suzuki Factory Racing Team will head back to Angel Stadium in Anaheim, Calif. for the third round of the 2018 Supercross series on Saturday, January 20th.