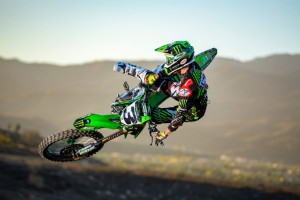 Press Release--After earning the AMA Motocross Manufacturer of the Year Award for the second consecutive time, Monster EnergyÂ® Kawasaki will have a team of familiar faces looking to continue their winning ways in 2018. Kawasaki had a successful year in Monster Energy AMA Supercross and AMA Pro Motocross in both classes, accruing two championships and 24 event wins, a dominating 41% of the total number of events. For 2018 the Monster Energy Kawasaki roster will feature Eli Tomac and Josh Grant with plans to place both of their KXâ„¢450F motorcycles on the podium.

"Looking into 2018, we have a great team on and off the track," said Monster Energy Kawasaki Senior Manager, Dan Fahie. "All of our riders have won races and I believe this year will be no different. I'm looking forward to the new season and the success that lies ahead."

Fresh off of winning the 450MX Championship, Tomac is looking forward to continuing working with the team and keeping the momentum going for the Monster Energy Cup into the upcoming year. After a few weeks off, Tomac will return to the gate in Las Vegas on October 14th donning the No. 1 plate and look to defend his 2016 Monster Energy Cup Championship. Marking his third year with the team, Tomac relentlessly proves to be a top contender in the premier class after his substantial success in 2017. Along with the Pro Motocross Championship Tomac added nine moto wins in motocross and nine main event wins in supercross to his impressive rÃ©sumÃ© and earned an overall podium at MXGP of USA.

Grant finished the supercross season in the top 10, confirming he is still a strong contender after 10 years in the premier class. After a solid start to the motocross season with multiple podium finishes, Grant was forced to end his season early after only competing in six rounds due to injury. Grant has since recovered and has been putting in laps as he prepares to join his teammate on the line at the Monster Energy Cup.