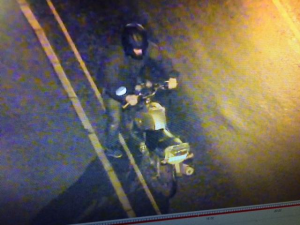 Say what you will about Big Brother surveilling you with cameras mounted all over the place in public spaces, but in Cirencester (a market area of Gloucestershire, England) CCTV might have saved the life of a motorcyclist and possibly others. Things got out of hand really quickly for the motorcycle rider seen in this still image. He had already fallen off of his Yamaha YBR125 and then when he tried to remount his motorcycle he did so backwards and from the frontend. Or was he trying to straighten out the handlebars, like you used to do when you crashed your bicycle?

According to Visor Down, CCTV viewers spotted the man struggling with his motorcycle and notified the Cotswold Police. When officers arrived it was determined the man was three times over the legal limit and was therefore arrested for drunk driving.

In an effort to help dissuade future occurrences of people trying to operate a motorcycle, or any vehicle for that matter, under the influence, the police department posted the image to their twitter account and stated: 'It's obvious you are #TooDrunkToDrive when you fall off your Yamaha and then can't remember how to get back on. Or which way to face...