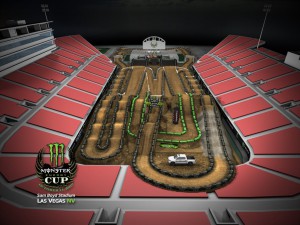 On October 14th some of the best racers in Supercross/motocross will battle it out on unique track for a shot at $1 million dollars as they go head to head to head in the three-race Monster Energy Cup. In its seventh year at Sam Boyd Stadium in Las Vegas, the Monster Energy Cup (MEC) has become a highly anticipated event for racers and dirt bike fans as its format, track layout, and grand prize payout equates to awesome edge of the seat racing and gets fans primed for the upcoming Supercross season.

As has been the case in years past, this year the track was designed by 5-time Monster Energy Supercross Champion, Ricky Carmichael. This year's track design features a split start that will pit 11 riders on each side separated by 44 feet stage area in between the gates. Similar to last year, the starting gate area is elevated however, unlike last year's extremely high gate that was basically at the top of the stadium, racers will rip down a 12-foot elevated start then head into 100 yard straight flat before making a hard 180 degree turn into a rhythm section then hit an open sweeper and another straight where the 22 riders will meet just ahead of the finish jump and carry on through the rest of the track.

Back again is the nefarious Joker lane which has proven to be the undoing a more than several racers' chance at glory as it's required that every rider take the lane once in each race. This year Carmichael has flipped the joker lane from being a longer section that is at the rider's disadvantage to a short cut that can give a rider the boost he needs to charge to the lead. So this will be an interesting strategy point to see at which stage riders choose to use the joker lane. 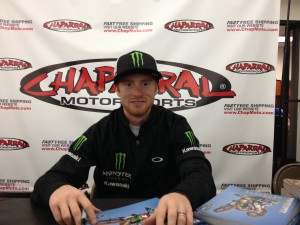 Of course then there's the $1 mill that's at stake. In order to ride away a millionaire one racer needs to sweep all three 10-lap races in victory. While Ryan Villopoto accomplished the feat at the inaugural MEC back in 2011, this has proven to be a tough challenge to replicate as no one has been able to do so since then. In fact, unlike many Supercross/motocross seasons where there have been multi-time winners and back-to-back winners, the MEC has yet to have a multi-time winner. As mentioned, Villopoto won the first event in 2011, Justin Barcia won 2012, James Stewart took the cup in 2013, Davi Millsaps grabbed the title in 2014, Ken Roczen won in 2015, and Eli Tomac rode away with last year's cup.

To keep the fans entertained throughout the day there will be a MEC pit party where fans can mix and mingle with their favorite racers. There will also be the Dirt Shark Biggest Whip contest and Monster Energy Head-to-Head Truck Racing exhibition with 7-time Monster Energy Supercross Champion Jeremy McGrath, X Games Gold Medalist Brian Deegan and his daughter Hailie Deegan (the only female and youngest driver named to the nine-member NASCAR Next Class) as well as BJ Baldwin and more competing.